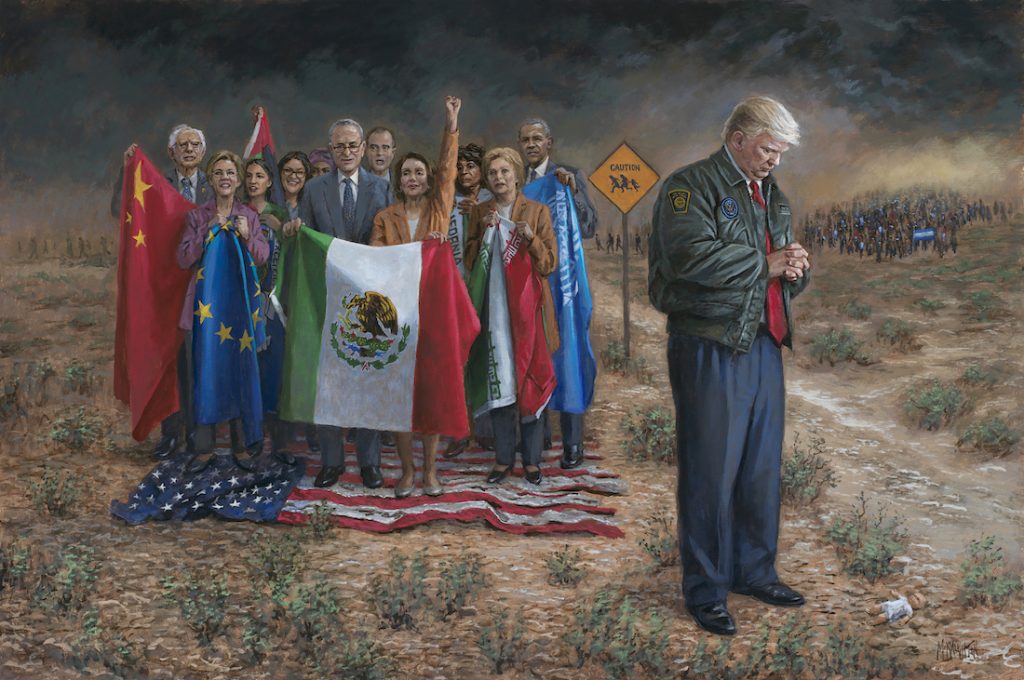 The adage “a picture is worth a thousand words” suggests complexity lends itself to simplicity in a single image. Those recognizing the national crisis at our southern border will understand then the allegory of artist Jon McNaughton’s painting “National Emergency.”

In the portrait, thousands of illegal immigrants, off in the distance, approach the U.S. border. In the right forefront stands a solemn President Donald Trump, hands clasped, his eyes locked on a doll on the ground discarded by a child, perhaps one whom illegals kidnapped seeking their free ticket to remain in America. In contrast, to the portrait’s left forefront stands a jubilant group of Democratic Party leaders. Several hold, as McNaughton explains, “the different flags that represent the countries they are more aligned with in terms of protecting their interests but not the American people’s interest.”

Most telling is what Democrats are standing upon – a large, trampled American flag. Perhaps with a final stroke of his brush, McNaughton conveyed one last hidden message: the skies above are filled with dark, ominous storm clouds.

The portrait captured McNaughton’s intention, explaining: “It truly is a national emergency what is happening on our border. And I wanted to make that very clear in this painting, who our enemies truly are. …(They) are trying to stop President Trump from doing the right thing: to protect the American people.”

McNaughton’s portrait was timely. Soon after its release, we saw far-left protestors tear down the U.S. flag at an ICE facility in Aurora, Colorado, replacing it with a Mexican one. Yet Democratic leaders have been unwilling to condemn the act.

A non-political view of what is transpiring at our southern border today, based on Democrats’ changing position on illegal immigration, leaves but one singular conclusion.

In 1995, President Bill Clinton beat the illegal immigration war drum, causing leading Democratic Party leaders to echo his concerns. He was applauded in his State of the Union Address for stating: “We are a nation of immigrants … but we are a nation of laws. Our nation is rightly disturbed by the large numbers of illegal aliens entering our country. … It is wrong and ultimately self-defeating for a nation of immigrants to permit the kind of abuse of our immigration laws that has occurred in the last few years … and we must do more to stop it.”

The flow of illegals across our border then was nothing compared to today.

In 2005, Obama kept that drumbeat going, lamenting: “We simply cannot allow people to pour into the United States undetected, undocumented, unchecked, and circumventing the line of people who are waiting patiently, diligently, and lawfully to become immigrants.” In 2014, he even made it clear (without opposition) migrant children without humanitarian claims would be returned.

In 2007, Senator Sanders marched in step with this, acknowledging: “I believe we have very serious immigration problems in this country. … Our border is very porous. … I think at a time when the middle class is shrinking, the last thing we need is to bring over … (are) millions of people into this country who are prepared to lower wages for American workers. I think it’s a bad idea.”

In 2009, Senator Schumer also towed the line, claiming: “Illegal immigration is wrong, plain and simple. Until the American people are convinced we will stop future flows of illegal immigration, we will make no progress.”

Even as late as 2015, Democrats still opposed illegal immigration as presidential candidate Hillary Clinton noted: “I voted numerous times when I was a senator to spend money to build a barrier to try to prevent illegal immigrants from coming in. And I do think you have to control your borders.”

Why the flip now to embracing open borders in a step moving us closer to socialism? The singular conclusion is a collective “body snatch” of the party’s illegal immigration ideology has occurred, triggered simply by political hatred for Trump. It drives Democrats to trample the U.S. flag and our national interests while promoting the national interests of other countries, as McNaughton suggests. Sadly, ignored too by Democrats is the massive financial impact illegal immigration will have on taxpayers.

The earlier anti-illegal immigration positions Democrats took were prompted by mass migrations caused by civil wars in several Central American countries. By 2000, it is estimated 20 percent of El Salvador’s population had relocated to the US. Today’s migration is mostly economically motivated, but civil unrest in places like Venezuela and Honduras are also factors.

The border crisis is a cancer. Trump has sought to minimize it with a body of options, such as sending troops, building a wall and threatening Mexico with tariffs for not helping. Meanwhile, Democrats are a tumor – their actions only feed the cancer.

Just like an overcrowded boat can capsize, so too can overcrowding break a country’s financial backbone as illegal immigrants suck the public welfare teat. None of the above Democrats bother to address this. When it was popular to oppose illegal immigration, Senator Diane Feinstein (D-CA) observed in 1994: “I think we should enforce our borders. To have a situation where 40 percent of the babies born on Medicaid in California today are born of illegal immigrants, creates a very real problem for the state. To have 17 percent of our prison population, at a cost of $300 million a year, be illegal immigrants who come here and commit felonies? That’s not what this nation is all about.”

Despite Democrats playing the race card (i.e., claiming Trump seeks to keep America white, promoting “a brown menace”), the issue is not racial. The issue is the burden – financial, human (crime, transmittable diseases, etc.) and humanitarian, we will face.

Failing to address it now, we will discover the storm clouds McNaughton portrayed were not just passing through.