A 26-year-old homeless man who went viral after a photo surfaced of him handing out his resume on the side of a highway has received hundreds of job offers as a result of his bold job-seeking effort, PEOPLE reported.

David Casarez held up a sign at a median that read: “HOMELESS. HUNGRY 4 SUCCESS. TAKE A RESUME” on Friday, attempting to catch the eye of potential employers.

“This is my make it or break it moment,” Casarez told KNTV-TV about his desperate plea. “I have to do something crazy.”

Despite graduating with a degree in management information systems from Texas A&M University, Casarez lost all his money when attempting to launch a startup in California. He was subsequently rendered homeless, losing absolutely everything, including the vehicle that had temporarily served as his home. Casarez said he had taken up residence in a local park, with nowhere else to turn.

But everything changed for the young man when motorist Jasmine Scofield passed by and asked if she could post his picture online. “Today I saw this young homeless man asking for people to take a resume rather than asking for money,” Scofield wrote on Twitter. “If anyone in the Silicon Valley could help him out, that would be amazing. Please RT so we can help David out!”

Scofield further explained David’s situation in another tweet: “I just got off the phone with David. We spoke for about an hour,” she wrote. “He came to the Silicon Valley with a dream to be successful in tech and has a lot to offer the community. He’s sleeping in parks & still trying to get freelance work, interviews, and applications in.”

As you can see below, her picture went viral, garnering over 135,000 replies and 133,000 retweets. According to a follow-up tweet from Scofield, Casarez has since received approximately 200 job offers, including from web giants Google, Netflix and LinkedIn. 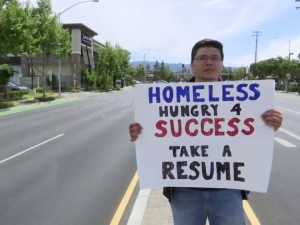 “I knew it would be posted on social media, I didn’t know it would blow up like this,” he told KNTV. “I’m trying not to take any money. I really do just want a job opportunity — that’s all I’m asking.”

Casarez said that holding up a sign on the side of a freeway was very much a last resort job-seeking tactic for him.

“I wanted to keep my head up high, keep looking forward and see what opportunity would come next,” he told the New York Post. “I was thinking, you know, like this was like my last stop. If this didn’t work, I’d go back home and give up on my dream.”