I’m No Dog Whisperer, But…

“Do not let kindness and truth leave you; bind them around your neck, write them on the tablet of your heart. So you will find favor and good repute in the sight of God and man” (Proverbs 3:3-4).

Listen, I’m not claiming to be Cesar Millan, the “dog whisperer”, but I’ve had enough dogs, both well-trained and ill-trained, to have observed a few commonalities in their behavior. Please allow me a little space (maybe even more than I deserve) so I can make an important spiritual point.

For some reason, most people train their dogs to do tricks. The standard approach is to offer them positive reinforcement, through the giving of rewards, whenever a desired behavior is completed. Bite-sized snacks are typically involved. Go to a circus and you can see the trainers constantly rewarding the animals for good behavior. We teach our pets to fetch, play tug-of-war, and even where to “do their business”. Most domesticated animals, like dogs, will figure out the paradigm and orient to it for the rest of their lives. “My owner feeds me when I do this thing, so I’ll keep doing it,” I imagine a dog saying to itself. 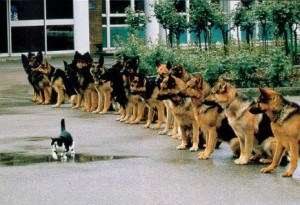 Eventually, well-trained puppies figure out who the master is, submitting, if for no other reason than the base desire to be fed. We might conclude that when a dog is young, its authority-orientation is more out of respect for rewards, less for their master. This is a self-serving motivation. For as long as the puppy perceives something good for itself, it will ‘perform’. This can be proven by asking a total stranger to show the puppy a snack and say, “Sit”. The puppy, if trained, will obey with a gleam in its eye, expecting that reward it sees. Its loyalty is to the snack, not the person. Immature authority-orientation, though the master is getting their desired behavior out of the animal, pivots on selfishness.

Selfish creatures may appear authority-oriented, but their respect is for personal gain, not for their master. Without respect for the master, authority-orientation is immature and therefore, when truly tested, will fail the master.

I believe humans are the same way. Mind you, God sees the heart and is really interested in what motivates us. “All the ways of a man are clean in his own sight, but the LORD weighs the motives” (Proverbs 16:2). A person who ‘acts out’ authority-orientation doesn’t always actually possess it. The issue is with the heart.

If a person perceives a personal reward, such as approbation from their peers, or a pat on the back from their superior, or maybe even a religious promotion of sorts, and that is their primary focus, then whom are they truly serving? They are serving themselves even though outwardly it appears as if they are serving their master. Therein lies the hidden reality…the one that runs contrary to Jesus’ own heart.

Puppies are unruly and self-absorbed. I’m not casting stones at them, just stating the obvious. Immature believers are the same way. Both need to be trained up in humility, otherwise they will remain as such. As time goes on and the faithfulness of their masters proves real, a different kind of relationship forms. However, if a subordinate chooses to run away from authority, they remain immature and selfish, even dangerous in a variety of ways.

Ever seen a person at the park with their mature dog? It’s unmistakable…the bond between them. It’s a real friendship. If the master says, “Fetch,” the dog bolts off and returns happily, gladly receiving an affirmation of adoration, nothing more. The relationship is symbiotic. A mature dog respects their owner and seeks to please them, not for the sake of personal reward (though it is there as friendship), but rather to affirm their own affection towards their master. Love gives.

Likewise, our Lord (which means “our Master”) isn’t seeking vacant authority-orientation. He doesn’t want you to follow His commands for merely personal reward. That would diminish the simple fact that He wants to have your love and respect. He doesn’t want to have a ‘coin-operated’ relationship with you, where you “do this” and you can expect to “receive that”. That’s religion and it’s ugly…that’s all “authority-orientation” without respect is – religion. In religion, self is master; whereas the true Master stands disrespected, off to the side.

Jesus wants to be our friend. We prove our friendship a lot like the mature dog does with its own master, by following commands out of respect and love. That is our base desire, regardless of promises for blessings. If/when we ever arrive at that kind of relationship with Him, our servitude is implied, no longer necessary to be asserted by either party…it just is.

Love is a beautiful thing when it’s void of selfishness. Authority-orientation WITH respect is a function of love…love being the pinnacle of spiritual growth.

“This is My commandment, that you love one another, just as I have loved you. Greater love has no one than this, that one lay down his life for his friends. You are My friends if you do what I command you. No longer do I call you slaves, for the slave does not know what his master is doing; but I have called you friends, for all things that I have heard from My Father I have made known to you” (John 15:12-15).