By Timothy Cockes/SBC of Virginia 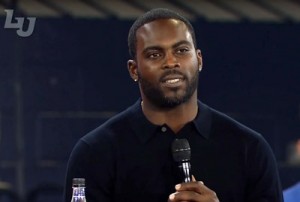 LYNCHBURG, Va. (BP) — Michael Vick recounted the recovery of his relationship with God during his time in prison, beginning with the 23rd Psalm, in addressing students at Liberty University Jan. 29.

The former pro quarterback, now an NFL analyst with FOX Sports, served 23 months in jail on a federal conviction in 2007 for his role in a dog-fighting operation.

“I found myself in prison for 23 months and it was a deep reevaluation process of my life and my perseverance moving forward,” Vick said, saying his mother’s advice had a profound impact on his faith.

“Every night that I went to sleep in prison for 544 days I read this prayer and every time that I read it, it took on a different meaning,” Vick recounted. “When I read it, it sent the same chills through my body every night.”

Vick said he was not raised in a Christian family but had tried his best to read and understand the Bible and do the right thing in faith, believing that following the Bible was important for following his dream to play in the NFL one day.

Vick even began putting the Bible under his pillow when he would go to sleep at age 12.

He went on to play for Virginia Tech, leading them to the National Championship game after the 1999 season. He was then drafted with the first overall pick in the NFL draft by the Atlanta Falcons, led the team to multiple playoff appearances and was the first NFL quarterback to rush for more than 1,000 yards in a single season in 2006.

All of this came crashing down when Vick was sentenced to prison during the prime of his career. During his time playing in the NFL, Vick said, he abandoned the faith in God because he thought he could do it on his own.

It was during his time in prison that Vick was harshly reminded of his need for the Lord and His presence.

“I felt as if I needed the Lord again and I needed Him right then and there,” Vick said. “The thing I learned is that God works on His own timing. I wanted to read this prayer and wake up the next morning and be released, but it wasn’t the time. In reading this prayer every day, it just made me a stronger person and it made me more of a believer, and it really helped me to become a true man of God.”

Vick was not alone in his quest for God. Tony Dungy, an outspoken Christian, former NFL coach and current NBC football analyst, visited Vick in prison a few months before he was released to serve as a mentor in his life.

“It was a visit that I never thought I would get,” Vick said. “When I see him there I think I’m about to go home and he’s here to help me get released or free me, but he said to me, ‘I want to talk to you for a couple hours and this is not about you getting released [from prison], it’s about you getting released from the things that you had covered up and been hiding all of your life.'”

Vick said he was immediately ready to take to heart what Dungy had to tell him. “It was like he was talking and I was digesting every word that came out of his mouth, I just wanted to soak everything he said in,” Vick said.

After his release from prison in 2009, Vick made a comeback in the NFL, playing several seasons with the Philadelphia Eagles and then the New York Jets and Pittsburgh Steelers.

In addition to being a FOX Sports analyst, Vick is actively involved with the Humane Society of the United States in advocating for the proper treatment of animals.