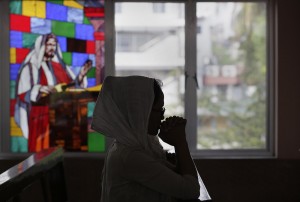 An Indian Christian prays at a Church on Easter Sunday in Gauhati, India, Sunday, April 16, 2017. Christians make up about 2.3 percent of India’s population of 1.26 billion. (AP Photo/Anupam Nath)

Advocates say persecution of religious minorities is rising in India

(WNS)–As persecution intensifies in India, government officials in the state of Madhya Pradesh have charged six Christians, including some pastors, with kidnapping and forced conversion for chaperoning children on the way to church camp.

Local police arrested the group in May along with more than 70 children en route to a summer Bible camp, according to International Christian Concern (ICC).

Local Hindu radicals told railway police the party of Christians was trafficking children for forced conversion, a crime in that state. Police intervened, detaining everyone at a train station.

Authorities released most of the children after three days. All the parents confirmed in front of a local court they had willingly sent their children to the camp.

One child, 15-year-old Akash Gundia, was in juvenile detention until June 20 because police would not release him to his father, according to Morning Star News.

“I told the police I am a Christian by birth, and we are going to attend the VBS, but they did not listen to me and took us to the police station,” Akash said after his release.

Although false accusations are common, ICC’s William Stark said the “forced conversion” charges surprised him. “It is somewhat atypical for them to be formally charged under the law,” Stark said, noting charges are usually reduced.

One parent, Nana Singh, said his family has been Christian for five years. He told ICC the charges are meant “to pressure Christians and intimidate them to go back to the Hindu religion.”

“Authorities have decided to ignore that fact [they are Christians],” Stark said. The government argues that since the parents’ national IDs label them Hindu, the children are Hindu, not Christian.

Stark said many low-caste Indians (Dalits) who convert to Christianity or Islam don’t go through the government process to change their religion on their identification because they would lose government benefits for caste discrimination. India’s government gives “scheduled caste” benefits to Hindu, Buddhist, and Sikh Dalits but denies them to Christians and Muslims even though discrimination does not end with a change of religion.

Family members of the detained Christians told ICC the prisoners are subject to police beatings, insufficient food, and harassment by fellow prisoners.