(WNS)–Indiana officials say two baby boxes—newborn incubators that allow women to anonymously surrender their infants—are illegal under state law and must be removed.

In a letter sent in early June to Safe Haven Baby Boxes, the nonprofit organization that installed the boxes, Indiana’s Department of Child Services (DCS) said the boxes are not a legal way for mothers to give up their babies. Women who use the boxes could face child abandonment charges, the agency warned.

But Safe Haven founder and director Monica Kelsey said the organization will not remove the boxes and will continue plans to install more across the state. In a letter to Indiana Gov. Mike Pence, attorney James Bopp said DCS has “no legal basis for the position that Baby Boxes are currently unlawful.” 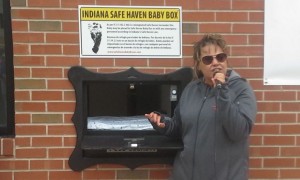 Last year, the Indiana legislature passed HB 1016, requiring DCS to submit recommendations to the state assembly and the governor for the installation and operation of newborn safety incubators. Pence signed the bill in April 2015. But instead of submitting recommendations by the January 2016 deadline, the Indiana Commission on Improving the Status of Children voted not to endorse HB 1016 and instead promoted the existing Safe Haven law.

“I want to be clear in stating that ‘baby boxes’ are not an authorized way to protect abandoned infants under Indiana law,” wrote Mary Beth Bonaventura, director of DCS, in the letter to Safe Haven.

Current Indiana state law includes a Safe Haven provision for women to legally relinquish custody of their newborns, up to 30 days after birth, at a hospital, fire station, or police station. As long as the baby shows no signs of abuse, the mother is shielded from any legal charges for abandonment or neglect. The law requires a mother to surrender her baby to a staff member during operating hours, not simply drop the baby at the door. This allows staff to offer assistance to the mother and, if she is willing, to collect basic health information about the child.

But Kelsey contends some women are intimidated by a face-to-face interaction and claims the boxes provide a safe location for those who might otherwise abandon their infants. Indiana state Sen. Travis Holdman, a Republican, said Friday he plans to work on legislation that would allow the use of baby boxes. In the meantime, DCS announced it will investigate any report of an infant placed in a Safe Haven baby box.

Dawn Geras, founder and president of Save Abandoned Babies Foundation in Chicago, said plenty can be done to make Safe Haven laws better but installing baby boxes is not a good option. Geras helped write the Illinois Safe Haven law and has since worked to advocate for and shape state Safe Haven laws across the country. She contends baby boxes eliminate the opportunity for a desperate mother to get any kind of help and make the act of surrendering her child something to be hidden.

Instead, Geras said states should improve signage at drop-off locations and communication about Safe Haven laws so women know it’s a legal option. She also advocates for unifying state laws. Although all 50 states and the District of Columbia have Safe Haven provisions, the acceptable locations and the timeline differ state to state. That can be confusing for a woman trying to make a difficult choice, Geras said.

According to the Save Abandoned Babies Foundation, 3,227 infants have been safely surrendered nationally since states started adopting Safe Haven laws in 1999.

This week added one more. On June 13, a mother safely surrendered her baby at the fire department in Napoleon, Ohio, according to the Defiance Crescent-News. The child is safe, healthy, and will be cared for, according to a police statement.