“Defendants AWAN and ALVI did unlawfully, willfully, and knowingly conspire, combine, confederate, and agree with each other to commit offenses against the United States,” the indictment read.

Awan and Alvi, who are reportedly close friends of Wasserman Schultz, have been the longtime information technology (I.T.) aides for dozens of top House Democrats, including Nancy Pelosi, Bob Wexler, and over 20 other high-level Democratic representatives. 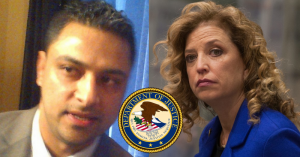 The two had unrestricted access to classified intelligence information available only to top members of the House Intelligence Committee during four years during the War on Terror.

They are also widely believed to have links to the Muslim Brotherhood and are allegedly the heart of a huge Democratic spy ring where sensitive information could have been handed over to potentially hostile foreign nationals — and the bread crumbs may lead all the way for failed Democratic presidential candidate Hillary Clinton.

Now formerly indicted, Awan was first arrested trying to leave the country in late July. He has retained Chris Gowen, a longtime legal assistant of former President Bill Clinton and wife Hillary, to represent him.

The charges against the two Democratic insiders include allegations of bank fraud, false testimony, and unlawful monetary transactions surrounding their suspicious behavior.

The Daily Caller, who first reported this story, wrote: Wasserman Schultz resigned from the DNC in July 2016 when Wikileaks released hacked committee emails. She has defended keeping Awan on her payroll even after she was aware he was suspected of, as she described it, “data transfer violations.” She claimed she had “racial and ethnic profiling concerns” and “would do it [keep Awan] again.”

But the conspiracy the Justice Department is investigating goes, much, MUCH deeper.