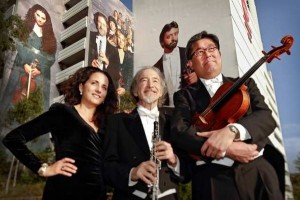 Kent Twitchell for the LA Chamber

(WNS)–Kent Twitchell made a splash on the American art scene in 1971 when he painted a mural of actor Steve McQueen that covered the entire side of a house in Los Angeles. He’s gone on to paint even more impressive murals, some of them eight stories tall, and all of them distinctive.  Perhaps the most striking are his paintings of Jesus, which he’s put on walls, overpasses, and other public spaces.

Far from being the temperamental, eccentric artist that we’ve come to expect because of the popular biographies of men like Andy Warhol, Jackson Pollock, and Pablo Picasso, Twitchell has a gentle, understated manner. We had this conversation in his studio near downtown Los Angeles.

Kent, it’s been said that you’re the godfather of mural painting in Los Angeles, and Los Angeles is the mural painting capital of the world. Do you blush when you hear that? I blush a little bit. There were others. The LA Fine Arts Squad was before me and painted some beautiful pieces a couple of years before I did back in the late ’60s. Art Mortimer, another artist that was painting, started about the same time I did on the west side. I guess I just kept doing it, and I’ve done them in a dramatic enough way that it’s been in the news longer. 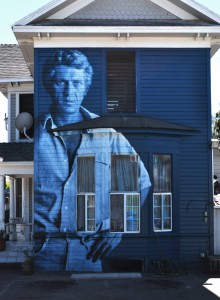 My understanding is that among your first public pieces that people know you for was a painting of an actor that you did on the side of a house in 1971. I considered Paul Newman, I also considered Steve McQueen. I almost flipped a coin and decided to paint Steve McQueen.

How did you get permission to paint someone on the side of a house? It was difficult in those days because there were hardly any murals around, and it was kind of experimental. But my friend, Becky Yoon, her family lived in that house … in the Pico-Union District. They thought I was going to paint on the side of the house. It was an old mom-and-pop store and there was a side that had signs and so forth. They went to Hawaii on vacation, and I just saw the front of the house and didn’t think anything of it. I painted McQueen coming out of the house, like a sort of ghostly figure. It got such attention by the Los Angeles Times and people from all over the world calling to interview me. … I thought I was the next Andy Warhol or something, I was so popular for about two weeks.

Did you ever get any feedback from Steve McQueen? I never did. I never tried to. I just did it on my own. I did hear back from his son. His son was interviewed in the LA Times after he [McQueen] had died. He had been driving around Los Angeles in his old pickup, which he was wont to do, and stumbled upon it, and woke his son up, Chad, in the middle of the night and told him about it.

One of the things about your murals that gets commented on a lot is they seem really lifelike. I heard someone say it’s almost as if your murals are not painted on a wall, but that they were there all along and somebody came along and wiped away the smudge and revealed what was underneath there. How does that description strike you? Well, that’s a great compliment. I do a lot of sketching and preliminary drawings to make sure that each figure looks as if it really belongs in that place. I think architecturally rather than just sticking something on a wall because I have something. I go through a lot of trouble to make sure that it belongs there and it looks like it has always been there. 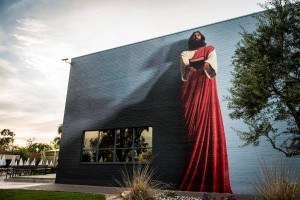 You’re pretty well known for your Jesus figures in LA. Explain why and how these various depictions of Jesus show up in your work. I went to a Bible church when I was a teenager in Lansing, Mich., and up behind the sanctuary was a giant painting of Jesus all in white coming again in the clouds. I remember every Sunday just sitting in there sketching that. I got some old Bible somewhere that’s been lost years ago with all these sketches of that Jesus coming again. I always had this fascination with painting Christ, the messiah, coming again in the clouds.

Of the heroic people that I’ve done, the Lone Ranger is a metaphor for Christ saving people. A lot of my works were underground religious paintings that are just meaningful to me. Otherwise, I couldn’t get up in the morning and have the inspiration to do them if it wasn’t something that was very personal to me. … There are people that paint inspiration from eastern mysticism, from Marxism, from atheism, from you-name-it, and nihilism. None of those ring a bell with me, but I’m Christian, and I’d be untrue to who I am inside if I didn’t paint something that was informed by my Christianity.

Did you have a conversion experience at some point in your life? Were you raised in a Christian home? What did that look like for you? Ever since I could remember, my mother was Christian. She would every night have me talking to God, so I grow up with a notion that you can talk to God. We went to a little Methodist church in the small town of Dimondale, where we grew up in central Michigan, and an evangelist came and preached at our church. We never had used the Bible or anything, and he had a Bible, this old, raggedy Bible, and he was really sort of a macho guy and I related to him as a kid. All of sudden, for the first time the Bible seemed like a pretty macho thing, which of course it is.

He talked about being born again, and I had never heard that. I told my mom later, “What is this born again? I don’t think I am that thing,” and she explained it to me. Finally she took us out of that church, and we went to a Bible church in Lansing. Every sermon was about being born again. I would sit there listening to those sermons knowing that I had not gotten to that place where I had devoted my life to God through Christ … on His terms and not on my own. I’d been living a life on my own terms, and I didn’t want to do it because I didn’t want to give up all this stuff.

I’d be sweating every time he’d have alter calls—the old fashioned Billy Graham alter calls. … Finally, my mother took me. She’d been watching this, and she walked me down, and I talked to the pastor. I didn’t feel any different, but I noticed that the next week I didn’t sweat anymore. I was really at peace from then on.

This happened when you were how old? I think I was probably about 15 or 16. 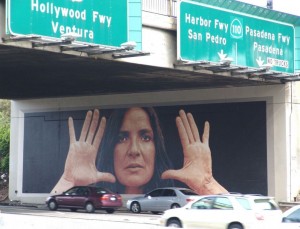 You’re 72 now, so that was 55 years ago, more or less. When did your artistic gift begin to flower? I was sort of a natural artist from the time I was about 3 years old.  In high school, I did a lot of things in the school. I was an illustrator with the Air Force, by the grace of God. It was impossible to get a job like that, but I just prayed and prayed and prayed. At 17 years old, I had to get my mother’s signature to join the Air Force. For five years, I was an illustrator. I had a top-secret clearance, I did a lot of very exciting things during the Cold War.

Kent, how do you make a living? The mythology of the art world is you’re either a starving artist or you’re superstar like an Andy Warhol. There’s not really much of a middle class in the world of art. You’re becoming a bit of a superstar, at least in some circles, but, in general, you’ve just been a working artist for the last 40 or 50 years, right? Someone once said that if you do anything long enough, people will start thinking you mean it. … I notice more and more museum curators, gallery directors, and art show writers were little kids when they admired the work that I was doing. In the beginning, they wouldn’t have ever even talked to me. Now they like me because they accepted my work as children.

Before I came over to your studio, I was doing another interview in another part of LA. I told the person I was with that I was coming to see you, and he was just in awe. He said, “I’ve heard about him, I’ve never met him, but when I’m stuck in traffic, it’s like I’m in a museum. I’m sitting on the freeway, but there’s this museum quality piece of art painted on an overpass, and it becomes a moment of peace and respite for me.” That’s great. I always wanted my pieces to be oases for the poor person who has to drive in the rush-hour traffic; just something that’s beautiful, handmade, and to uplift a little teeny section of time.