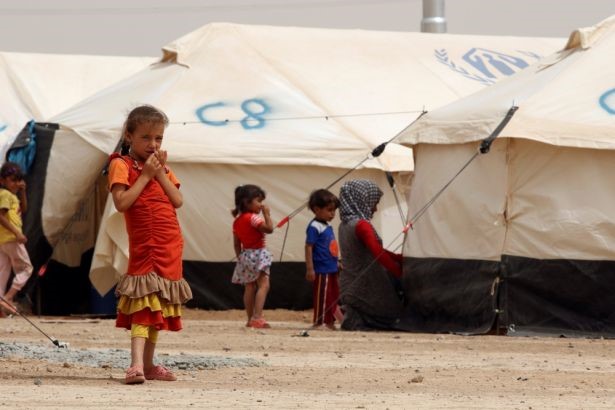 Displaced children, who fled from the Islamic State violence, gather at a refugee camp in the Makhmour area near Mosul, Iraq, June 17, 2016. Picture taken June, 17 2016.

(ChristianPost) Iraqi Christians who were forced to flee their homes two years ago and are now living in refugee camps say they are determined to stay and help rebuild the country despite the risk of being killed by Islamic State militants, according to a new report.

The international nonprofit ministry Open Doors, which has supported persecuted Christians for more than 50 years, announced last week that it spent eight months consulting with church leaders in Iraq and Syria to release a report called “Hope for the Middle East” in collaboration with Middle East Concern and the University of East London.

The report, which will be launched in the British Parliament on Oct. 12, documents “the contributions that Christians have made to the region and looked at healthcare, business, culture and welfare across the centuries,” and will include recommendations for how the British government can effectively speak and act on behalf of the church in the Middle East.

Zoe Smith with Open Doors told Premier UK that many Christians are choosing to stay in Iraq and plan to rebuild the country.

“[Christians are] really recognized for reconciliation, they’ve been referred to as the glue that holds society together in the Middle East. … We’ve been telling the persecution side for a long time, but we’ve not been telling so loudly the story of those who have chosen to stay,” Smith said.

One Iraqi Christian told Open Doors: “I want my fellow Iraqis to know that we are not guests in Iraq. Our ancestors built this country. Treat me as a sister, not as a guest.”

Saturday August 13th marked the two-year anniversary of the day when IS attacked Qaraqosh, driving out residents who would not convert to Islam or pay a steep tax.

Father Romi Salim Momika, one of three priests ordained in a prefabricated church inside Erbil’s Aishty 2 camp for the displaced, said in an interview with the Catholic News Agency that he wanted his ordination to be a source of hope for people in the camp, most of whom are Syriac Catholics from the Iraqi city of Qaraqosh and have been living as refugees for the past two years.

Around 1,500 people showed up for the ordination service though the church only has capacity to hold 800. The entire camp is home to approximately 5,500 people who were forced to leave their homes when IS gained control of the region.

Violent persecution surrounds them, and unless his archbishop moves him elsewhere, Momika intends to stay with the refugees, saying he hopes to give the Christians there “power, hope, and courage to continue their lives and stay with the poor people.”

Such desire to stay and rebuild is remarkable given that it was only a few months ago when some were issuing warnings that the Iraqi Christian population could very well be completely wiped out.

“We are a people on the brink of extinction,” said Juliana Taimoorazy, a Chaldean Catholic and ethnic Assyrian, to the National Catholoc Register back in April.

Hundreds of ancient Christian churches and places of worship have been destroyed by IS throughout Iraq and Syria, while millions of people have been forced to flee as refugees, and entire groups have been killed. Large Christian communities have also been emptied, putting an end to thousands of years of history.