(RNS) Donald Trump has described himself as “Presbyterian and Protestant,” a “Sunday church person” and a collector of Bibles.

Now the presumptive Republican presidential nominee reportedly can add “born-again Christian” to that list, too, according to one of the members of Trump’s new evangelical advisory board. 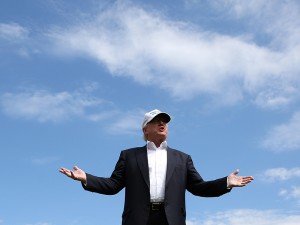 Republican presidential candidate Donald Trump speaks to the media on the golf course at his Trump International Golf Links in Aberdeen, Scotland, on June 25, 2016. Photo courtesy of REUTERS/Carlo Allegri
*Editors: This photo may only be republished with RNS-BORN-AGAIN, originally transmitted on June 27, 2016.

Trump recently accepted a relationship with Jesus Christ as his Savior, making him a “baby Christian,” Focus on the Family founder James Dobson said in an interview posted Friday (June 24) to Michael Anthony’s website, Godfactor. Dobson and Anthony, pastor of Grace Fellowship in York, Pa., spoke after the candidate’s meeting Tuesday in New York City with nearly 1,000 evangelicals.

“He did accept a relationship with Christ. I know the person who led him to Christ, and that’s fairly recent. … I believe he really made a commitment, but he’s a baby Christian,” Dobson said.

Trump campaign chairman Paul Manafort declined to comment on the report the following Sunday on NBC’s “Meet the Press,” saying, “I’m not going to speak to Donald Trump and his embrace of religion. You’ll have to talk to him about that.”

But, Dobson told Anthony, that’s why Trump “doesn’t know our language,” noting the candidate spoke during the meeting about “religion,” but not “faith” and “belief.” Other words the candidate never used, according to transcripts: “Jesus,” “pray,” “Christ” and “Bible.”

“You gotta cut him some slack. He didn’t grow up like we did,” Dobson said.

Anthony responded with an allusion to the original “Damascus Road” conversion in the New Testament book of Acts. The Apostle Paul, then called Saul, had violently persecuted Christians before he encountered Jesus along the road to Damascus.

“I’m sure Saul when he became Paul didn’t know much of the language either,” he said.

Other Christians have responded on social media to the news of Trump’s reported come-to-Jesus moment with somewhat less enthusiasm.

And in a blog post about Dobson’s statement, John Fea, chair of the history department at Messiah College in Grantham, Pa., called Trump’s meeting with evangelicals “the theo-political equivalent of money laundering.”

“Dobson and his gang are making Trump clean so that he is worthy of evangelical votes,” Fea said.