Is It Crazy to be a Christian?

There are plenty of people in this world who would have you believe that it’s crazy to be a Christian. With atheists, agnostics, and “nones” (those who don’t affiliate with any religion or belief system) on the rise in America, open mockery of the Bible is something that is becoming more common by the day. Many of them identify themselves that way because they’ve bought into the belief that it is simply ridiculous to accept the Bible’s claims, arguing that some of the Bible’s accounts are far too absurd for them to accept the Bible’s bigger claims (such as those on morality or sin and justification). To paraphrase, the argument that comes up so often looks something like this: 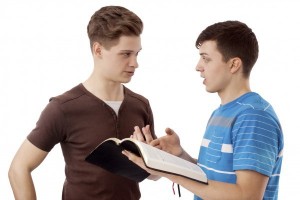 “We’re supposed to listen to your rules about sex or abortion or the afterlife when you believe in a talking snake, a talking donkey, the Red Sea parting to create a path of dry ground, and people coming back from the dead? Haha, sure.”

The implication, of course, is that Christians operate on blind faith and that we’ve accepted absurd beliefs in order to maintain our trust in biblical inerrancy. Admittedly, no one in today’s world has ever seen a talking snake, or a talking donkey, or any of the other miraculous occurrences the Bible describes. But what isn’t being considered is the truth claims that are implicit in the popular beliefs held by most today. Are Christians the only ones accepting difficult to explain beliefs? Of course not.

Consider the implications that underlay the very foundations of the beliefs held by many of those who mock Christianity.

Now you tell me – who’s operating on blind faith? Who’s accepting absurd claims at face value? What’s harder to believe, a talking snake or a random explosion creating everything? We’re all accepting certain things in our belief systems on faith. The key is to examine the core foundations of a belief system and then weigh the harder to explain details from there. And that’s where disbelief loses. It is the very pillars of evolutionary belief that discredit it as impossible. The Bible, on the other hand, acknowledges the absolute necessity of a supernatural being (spoiler alert: God) for its claims. If there is a God, the Genesis account (and all of the other biblical accounts) make sense. If there isn’t a God, no set of beliefs makes sense.

So, no… it’s not crazy to be a Christian. Perhaps it’s time for you to take a step of faith in the right direction. On the first of the year we usually make resolutions which last little more than the time it takes to make them, hoping for a change in our lives. We all need change and relief from this crazy world around us, a peace which surpasses all understanding. The peace you are looking for can only come through forgiveness of your sin, the very reason God sent His Son Jesus into the world. For God so loved the world, that he gave his only begotten Son, that whosoever believeth in him should not perish, but have everlasting life. John 3:16 He understands your troubles and desire to change; and says, That if thou shalt confess with thy mouth the Lord Jesus, and shalt believe in thine heart that God hath raised him from the dead, thou shalt be saved. Romans 10:9. Only believe and you will be saved. Say a simple prayer something like this:

Jesus, please forgive me… I know I haven’t done everything that I should with my life and I regret it. I know that you died for me and that you have a plan for my life. Please teach me your ways and help me to live my life for you, free from the fears of this world and the next. I want to be ready for eternity with you. Amen