Is Obama a Russian Agent? 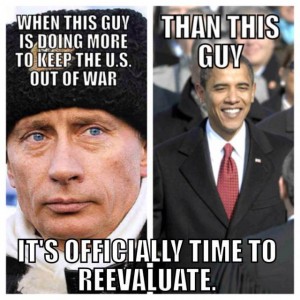 (Information Clearing House) – Sometimes a case looks weak because there is no “smoking gun”—no obvious, direct evidence of conspiracy, malfeasance or evil intent—but once you tally up all the evidence it forms a coherent and damning picture. And so it is with the Obama administration vis à vis Russia: by feigning hostile intent it did everything possible to further Russia’s agenda. And although it is always possible to claim that all of Obama’s failures stem from mere incompetence, at some point this claim begins to ring hollow; how can he possibly be so utterly competent… at being incompetent? Perhaps he just used incompetence as a veil to cover his true intent, which was always to bolster Russia while rendering the US maximally irrelevant in world affairs. Let’s examine Obama’s major foreign policy initiatives from this angle.

Perhaps the greatest achievement of his eight years has been the destruction of Libya. Under the false pretense of a humanitarian intervention what was once the most prosperous and stable country in the entire North Africa has been reduced to a rubble-strewn haven for Islamic terrorists and a transit point for economic migrants streaming into the European Union. This had the effect of pushing Russia and China together, prompting them to start voting against the US together as a block in the UN Security Council. In a single blow, Obama assured an important element of his legacy as a Russian agent: no longer will the US be able to further its agenda through this very important international body.

Next, Obama presided over the violent overthrow of the constitutional government in the Ukraine and the installation of an American puppet regime there. When Crimea then voted to rejoin Russia, Obama imposed sanctions on the Russian Federation. These moves may seem like they were designed to hurt Russia, but let’s look at the results instead of the intentions. First, Russia regained control of an important, strategic region. Second, the sanctions and the countersanctions allowed Russia to concentrate on import replacement, building up the domestic economy. This was especially impressive in agriculture, and Russia now earns more export revenue from foodstuffs than from weapons. Third, the severing of economic ties with the Ukraine allowed Russia to eliminate a major economic competitor. Fourth, over a million Ukrainians decided to move to Russia, either temporarily or permanently, giving Russia a major demographic boost and giving it access to a pool of Russian-speaking skilled labor. (Most Ukrainians are barely distinguishable from the general Russian population.) Fifth, whereas before the Ukraine was in a position to extort concessions from Russia by playing games with the natural gas pipelines that lead from Russia to the European Union, now Russia’s hands have been untied, resulting in new pipeline deals with Turkey and Germany. In effect, Russia reaped all the benefits from the Ukrainian stalemate, while the US gained an unsavory, embarrassing dependent.

Obama’s next “achievement” was in carefully shepherding the Syrian conflict into a cul de sac. (Some insist on calling it a civil war, although virtually all of the fighting there has been between the entire Syrian nation and foreign-funded outside mercenaries). To this end, Obama deployed an array of tactics. He simultaneously supported, armed, trained and fought various terrorist groups, making a joke of the usual US technique of using “terrorism by proxy.” He made ridiculous claims that the Syrian government had used chemical weapons against its own people, which immediately reminded everyone of similarly hollow claims about Saddam’s WMDs while offering Russia a legitimate role to play in resolving the Syrian conflict. He made endless promises to separate “moderate opposition” from dyed-in-the-wool terrorists, but repeatedly failed to do so, thus giving the Russians ample scope to take care of the situation as they saw fit. He negotiated several cease fires, then violated them.

There have been other achievements as well. By constantly talking up the nonexistent “Russian threat” and scaremongering about “Russian aggression” and “Russian invasion” (of which no evidence existed), and by holding futile military exercises in Eastern Europe and especially in the geopolitically irrelevant Baltics, Obama managed to deprive NATO of any residual legitimacy it once might have had, turning it into a sad joke.

But perhaps Obama’s most significant service on behalf of the Russian nation was in throwing the election to Donald Trump. This he did by throwing his support behind the ridiculously inept and corrupt Hillary Clinton. She outspent Trump by a factor of two, but apparently no amount of money could buy her the presidency. As a result of Obama’s steadfast efforts, the US will now have a Russia-friendly president who is eager to make deals with Russia, but will have to do so from a significantly weakened negotiating position.

As I have been arguing for the last decade, it is a foregone conclusion that the United States is going to slide from its position of global dominance. But it was certainly helpful to have Obama grease the skids, and now it’s up to Donald Trump to finish the job. And since Obama’s contribution was especially helpful to Russia, I propose that he be awarded the Russian Federation’s Order of Friendship, to go with his Nobel Peace Prize.

Dmitry Orlov was born in Leningrad and immigrated to the United States in the 1970’s. He is the author of Reinventing Collapse, Hold Your Applause! and Absolutely Positive, and publishes weekly at the phenomenally popular blog www.ClubOrlov.com .