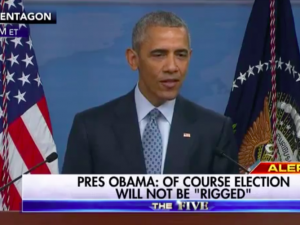 The Obama administration has just unveiled a plan to run the entire 2016 presidential election like one big Chicago ward — and it’s a very real threat to democracy itself.

It’s not as far-fetched as it first seems. With the stroke of a pen, Obama could nationalize every election board in the country and make them follow any voting standards he draws up. Unbelievably, the president says he’s doing this to fight voter fraud.

Last Monday Secretary of Homeland Security Jeh Johnson told the nation’s top election officials that the Obama administration is considering designating certain electoral systems “critical infrastructure” – like banks and the power grid – which have to be protected from cyber-hackers. That would allow Obama to intervene to “secure” the system under Presidential Policy Directive 21 and Executive Order 13636.

Right now, voting policies are set by 9,000 jurisdictions nationwide.  This plan would transfer that power from local communities and elected officials to the Obama administration.

As if on cue, the mainstream media has rushed to cover the vote hacking threat, including outlets like the New York Times, NBC News, ABC News, CBS, CNN, Bloomberg, and Politico – all of which ridiculed allegations of voter fraud from Republican presidential candidate Donald Trump and other conservatives.

And the whole thing is very suspicious, because there’s one glaring problem with the Obama administration’s new push: Right now, the system is safe from being compromised on a national scale, because local authorities are responsible for each of the 9,000 districts.

70 percent of districts use paper ballots, and even among electronic voting machines, almost all have a paper trail, and the machines are not interconnected.

White House spokesman Josh Earnest even admitted having 9,000 different systems makes it more difficult for hackers “to identify a common vulnerability.” Still, he insisted, “It’s important for the federal government to offer support to state and local governments” on voting machines.

So, what’s really going on? Here’s what we do know — Obama is placing his people in charge of elections from coast to coast.

What will they suggest? In 2002, the Help America Vote Act (HAVA) encouraged districts to use electronic voting machines, which are vulnerable to hacking. Will Obama finish the job and promote electronic machines in place of paper ballots nationwide while pretending he’s “solving” the problem?

And just whose side is he working on? Obama and Hillary Clinton’s most important benefactor, George Soros, has tried to control the nation’s election policy for years. In 2006, he funded the “Secretary of State Project” to elect the top election official in each state. But the voters have mostly rejected Soros-backed candidates. This would let him take the state completely out of the picture.

Instead, the new policy would let Obama put his hand-chosen federal enforcers in their place.

“Designating the nation’s election system as ‘critical infrastructure’ under a post 9/11 federal statute may be a way for the administration to get Justice Department lawyers, the FBI, and DHS staff into polling places they would otherwise have no legal right to access, which would enable them to interfere with election administration procedures around the country,” wrote Hans von Spakovsky, a former member of the Federal Election Commission (FEC).

In the 2012 election, Obama sent hundreds of federal election observers to 23 states, where they helped those who did not speak English vote in the presidential election. But this year, thanks to the Supreme Court’s ruling in Shelby County v. Holder, Obama’s Justice Department has been restricted to only sending government officials to five states.

Discovering a new, urgent voter hacking problem is their “Open Sesame” to send the feds back in.

Experts agree that electronic voting machines, like all electronic machines, are vulnerable to being rigged. But there’s a problem: The vast majority of them aren’t online.

The only way to control them is to somehow hack each machine manually. That means the would-be vote hackers have to be able to physically place something, like an electronic card, into each individual machine. Then, they can set the election’s outcome at will.

Brian Varner, a technology expert with Symantec Security Response, tested electronic voting machines and procedures and showed CBS News just how easy it is to hack a machine by hooking a small, electronic device to a voting card.

“For $15 and in-depth knowledge of the card, you could hack the vote,” Varner said. “I can probably put about 400 votes in myself in less than a couple minutes, and the poll workers would be none the wiser,” he added.

Others have shown how a hacker can secretly insert a card into Diebold electronic voting booths, which are still in use in a handful of areas, and pre-program the election results for their chosen candidate.

But to do either of these, the criminals have to get their hands on the voting machines directly – not an easy task with 9,000 state and local officials watching the machines every minute.

Not, unless, these local officials are stripped of their powers.

Declaring voting booths “critical infrastructure” would give the Obama administration – and any group it chose to share that information with – “in-depth knowledge” of the cards each machine uses, possibly even the ability to choose the machine.

It gives them legal permission to be in close physical proximity to those machines. It also gives them the authority to stop local election officials from interfering. Therefore, it potentially gives the Obama administration proxy access to the nationwide voting network that has been proven vulnerable on a local scale.

That’s a very real danger to our nation.