Is the US Government an Israeli Puppet? 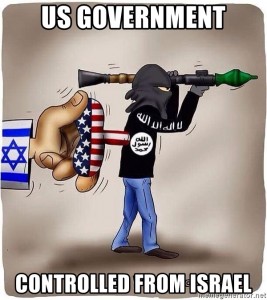 We’ve been hearing about Russia’s interference in the 2016 election for a while, some of us even pretend to believe it as long as our favored political party benefits. According to Robert Mueller’s investigation, 13 Russian nationals and three Russian entities spent $1.25 million per month on politically oriented ads during the 2016 American election season.

While we have spent over a year fixated by those arguably small contributions, no one seems particularly concerned with the over $18 million coming from pro-Israel lobbies in the same period. J Street alone gave Dems over $3 million during the last election cycle.  So, what exactly is the problem with foreign influencers targeting our elections? Are certain countries welcome to influence while others are barred? To be Orwellian, are some foreign countries more foreign than others?

Let’s see what kind of influence Israel lobbying efforts have had on our county.

According to University of Chicago Professors John Mearsheimer and Stephen Walt’s London Review of Books essay, “The Israel Lobby,” the pro-Israeli lobbies were key players on the road to many wars. As the essay explains, while most Americans view the Iraq war as an attempt to garner oil, Israeli security was at the forefront of many official discussions. According to Philip Zelikow, a former member of the Foreign Intelligence Advisory Board, the executive director of the 9/11 Commission, and formerly a counselor to Condoleezza Rice, the “real threat” from Iraq was not a threat to the United States.

On 16 August 2002, 11 days before Dick Cheney’s pro-war speech at the Veterans of Foreign Wars, the Washington Post reported that “Israel is urging US officials not to delay a military strike against Iraq’s Saddam Hussein.”

According to former Israeli prime minister Ariel Sharon, strategic coordination between Israel and the US had reached “unprecedented dimensions,” and Israeli intelligence officials had given Washington a variety of alarming reports about Iraq’s WMD programs. As a retired Israeli general put it, “Israeli intelligence was a full partner to the picture presented by American and British intelligence regarding Iraq’s non-conventional capabilities.”

Some neo-cons are still looking for those weapons – in a bombed out, divided power vacuum once known as Iraq. Some even have the shocking audacity to suggest that the virtual tin cans with 30-year-old traces of chemical gas found since the war justify the $2.4 trillion bit of adventurism.

Our recent aggressive desire to influence Syria was foreshadowed by Israel, as well. Nine months before then President Obama pleaded with Congress to authorize military force against Syria, Israel’s aggression was already well underway. In January 2013, Israeli warplanes carried out a strike on a Syrian convoy believed to be carrying sophisticated aircraft weaponry.

An American official, who spoke on the condition of anonymity to the New York Times, said Israel had notified the United States about the attack, which the Syrian government condemned as an act of “arrogance and aggression.”

While many have forgotten, even the false claims regarding Syria’s use of chemical weapons against rebels were initially propagated by Israel.

Brig. Gen. Itai Brun, chief of research for Israeli military intelligence, told a security conference in Tel Aviv that there was strong evidence that a lethal chemical weapon, likely the nerve gas sarin, had been used in incidents near Damascus and Aleppo on March 19, 2003. He said that photographs of victims with foam coming out of their mouths and contracted pupils were signs of sarin use. “To the best of our understanding, there was use of lethal chemical weapons,” Brun told the Institute for National Security Studies.

The following week, with no further investigation, President Obama confirmed in a press conference that Bashar al-Assad had deployed chemical agents in the protracted Syrian civil war. Unfortunately for Syria, Obama and his Israeli intelligence were wrong.

According to the Washington Times, “Carla del Ponte, a member of the U.N. Independent International Commission of Inquiry on Syria, told Swiss TV there were strong, concrete suspicions but not yet incontrovertible proof, that rebels seeking to oust Syrian strongman Bashar al-Assad had used the nerve agent.”

A year later, in the report titled “Possible Implications of Faulty US Technical Intelligence,” Richard Lloyd, a former UN weapons inspector, and Theodore Postol, a professor at the Massachusetts Institute of Technology (MIT), examined the delivery rocket’s design and calculated possible trajectories based on the payload of the cargo. What they found was troubling to many Americans: the chemical weapons launched at rebels could not possibly have been launched from a Syrian controlled territory, meaning the American and Saudi backed rebels were responsible for the incident.

There is an old joke that Israel grows its soldiers on a giant ranch between Canada in Mexico, where protectors of Zion grow strong on a diet of corn products and fake news. In America, we argue over peanuts – blaming our debt on red herrings like food stamps or education – all while we spend trillions of dollars acting as an enforcer for Israel.

Before you keep ranting and raving about the Russian collusion, why don’t you take a look at who has really kept us in perpetual war for much of my life? Next time you hear a politician – like Bob Menendez, who introduced the 2013 bill to attack Syria – tell you about a foreign war America needs to participate in, go to opensecrets.org (a site that tracks campaign contributions of all politicians) and see how many contributions they get from the Israel lobbies. We bet you’ll see a trend develop.