Robert Reilly, author of The Closing of the Muslim Mind, talks about how a ninth-century theological schism helps explain execution videos of Coptic Christians on Libyan beaches

(WNS)–The reason ISIS behaves so irrationally can be traced to a ninth-century theological dispute in Sunni Islam, according to Robert Reilly, director of the Westminster Institute and author of The Closing of the Muslim Mind: How Intellectual Suicide Created the Modern Islamic Crisis. The Mu’tazilite school, as he explained in a lecture at Patrick Henry College in October, believed God is a god of reason and justice. It attempted to balance revelation and reason. If revelation—the Quran—appeared to conflict with reason, revelation must be reinterpreted or discarded.

The Ash’arite school, on the other hand, taught that God is pure power and therefore revelation dominates all, including reason. Man must submit to the Quran without questioning. 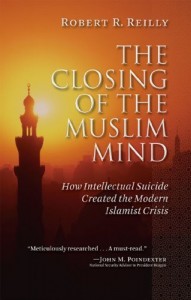 “The mind, once it testifies to the truth of the Prophet, must cease to act,” as one Islamic scholar put it.

In Ash’arite theology, man has no free will, is incapable of determining right from wrong, and the only cause of anything is the will of Allah, Reilly explained. An arrows flies because Allah sustains its path, not because of momentum. If you cut off a man’s head and he dies, he died because it was Allah’s will, not because of any other cause.

The Ash’arite school of thought became the dominant teaching among Sunnis, who became the majority sect in Islam. There is still a strong strain of irrationality in Sunni Islam, argues Reilly, and its central role in jihadist ideology helps explain why the Arab world mostly abandoned scientific inquiry and, in UN assessments, stands near the bottom of every measure of human development. This irrationality also helps explain why ISIS takes jackhammers to priceless artifacts and lines up Coptic Christians to slit their throats.

“Islamism is a spiritual pathology based on a deformed theology that produced a dysfunctional culture,” Reilly said.

Reilly spoke with WORLD Magazine after his lecture.

How did you become interested in this topic? I’m a student of political philosophy and was a Cold Warrior. I spent years in government and outside addressing the Evil Empire. My preparation for that was the study of 20th and 19th century ideology. Studying Nietzsche and Marx and Lenin gave me the background for working in the U.S. Information Agency, the State Department, The Voice of America, and other agencies.

How influential is this idea today? Most Muslims are not Arabic. But since it’s an Arab religion, since Allah speaks Arabic, since the Quran is in Arabic, what happens in the Middle East, not Indonesia, is what decides what happens in Islam. So it’s central. It’s not just a big deal—it is the deal.

The incomprehensibility of the universe seems to me a profoundly unappealing idea. Why did this school of thought become so popular? Historically, it was imposed by force. For some the appeal is that if you die in jihad you go to paradise with all the virgins; if you don’t die you get to loot and enslave the people that you’ve conquered. It’s a religion of power.

Also, Islam isn’t just a religion. It regulates everything, from what you can and can’t eat to which way you face in the bathroom. There is nothing outside of it; it’s all encompassing. That’s why for a Muslim to leave Islam is far more difficult than for a Westerner to leave a religion. One of the appeals is its comprehensiveness; it transfers the burden of responsibility, it says you are relieved from the responsibility of making moral decisions. All you have to do is obey.

So this version of Islam provides not only direction but clarity? It’s the reason you see something as insane as a woman in Europe converting to Islam and taking the veil. Why would she do such a thing? And the reason is there doesn’t appear to her an alternative that provides an objective moral order according to which she can live. Maybe she’s sickened by the materialism and hedonism and the sexual exploitation, the lack of any notion of the transcendence in the life of Europe, except as relics in museums.

One contrast between Islamist legalism and the gospel is that Christ calls us to love God with all our being, including our minds, to think about how best to love our neighbor, for example. The other striking thing that Christians find hard to comprehend in Islam is that there is no “love your neighbor.” It’s “love your fellow Muslim.” Christianity teaches we’re all made in the image of God, and now you are to see Christ sitting next to you or in the person who fell into the ditch, so serve God by serving him. Not everybody lives up to the idea but it transformed the world that accepted it, and it certainly doesn’t exist in Islam.

You described what we are seeing in the Middle East as “the collapse of a civilization or at least a culture into complete dysfunction.” The post-Ottoman order is coming unglued. The notion of nation doesn’t exist within Muslim thinking or doctrine. There is only the Ummah [community of Islamic peoples], which is unitary. The only political order congruent with that is the caliphate. Order is possible, but it’s an order imposed by violence, and that’s the only order we will see emerge from this terrible cauldron in the Middle East now: the one imposed by the strongest horse.

What are the implications for how the West addresses terrorism? Foreign policy? Humpty Dumpty can’t be put back on the wall. These colonial creations [Middle Eastern countries] have demonstrated their fragility. They’re not accepted by the people who live under them and they’re going to reconstitute political order differently. And that’s not ours to do, nor are we capable of doing it. The only thing we can do is try and help and protect our friends. The Russians are giving a clear demonstration how to do that [in Syria]. And we should help people like the Kurds. We should try to minimize the damage to ourselves and to the one great strategic asset there, oil.

The big danger, though, is what Bin Laden presented in the beginning of his dream, which is uniting the Ummah with Saudi oil wealth and Pakistani nuclear weapons. And once you’ve combined those things, then you really do have a caliphate that’s capable of expanding and taking on the West again.

That’s a sobering thought. It is, but they are too dysfunctional to achieve that. They really are, although it doesn’t mean [ISIS leader] Abu Bakr al-Baghdadi can’t succeed in carving out his mini-caliphate there in Syria and Iraq. The caveat is of course the possibility they will get weapons of mass destruction. If they get their mitts on those, there’s no question that they will use them. We are, ironically, driving the Sunnis into the arms of ISIS by siding with the Shia, and since we don’t give the Sunnis any alternatives as we did under [Gen. David] Petraeus, they just feel abandoned by the United States.

Compare fighting this problem with Islam with fighting communism. We’re not even in the fight.

Is it because we haven’t recognized the problem? It’s because we’re clueless. We deny the nature of the conflict, just as President Barack Obama refuses to name it.

We believe that people in Islamic countries will or do accept our presuppositions about what people and society should be like? We think that by saying so it becomes so, but it doesn’t. The other very amusing thing about heads of state insisting that Islam is this or Islam is that is that Muslims could care less about what Obama or [British Prime Minister David] Cameron says about Islam. Islamists sometimes use what Western leaders say to instigate riots, but my point is that the only people Obama is fooling when he says such things are Americans.

Would you say that Americans don’t have realistic expectations of how much reform is possible or likely in the Middle East, so we’re over-reaching? That’s one huge bit of hubris and ignorance on our part. And then we’re not even supporting the people on the right side like [Egyptian president Abdel Fattah] al-Sisi. Egyptians don’t want the Muslim Brotherhood, which is the ideological source of Islamism today. What proved that is the massive demonstration against [the Brotherhood’s Mohammed] Morsi, which led to al-Sisi overthrowing him. Al-Sisi saved Egypt, and so of course the Obama administration cut off aid to al-Sisi.

Last year, al-Sisi warned clerics and religious scholars in a speech at Al-Azhar University, the most prestigious teaching institution in the Arab world and a promoter of Ash’arite theology, that it is “inconceivable that the ideology we sanctify should make our entire nation a source of concern, killing, danger, and destruction all over the world. … I say these things here, at Al-Azhar, before religious clerics and scholars. May Allah bear witness on Judgment Day to the truth of your intentions regarding what I say to you today.”

You mentioned in your talk a movement, small groups of scholars and leaders, to change attitudes toward reason and rationality among Sunni Muslims. How strong is it? What are the prospects for change? The prospects are very dire. These people are very weak and they have no support. Most of them live abroad because it’s too dangerous for them to live in the Middle East.