ISIS is Near, No One is Safe and Why We Should Think About It

By now you’ve heard that ISIS has struck again, and again they have directed their hate towards Paris. Over 100 people enjoying dinner, enjoying entertainment struck dead without a thought.

Before you think this is only a French problem, know that there are over 1000 active ISIS probes in the United States. So many men and women, probably living in your neighborhood, are actively plotting someway to kill as many people as they can. 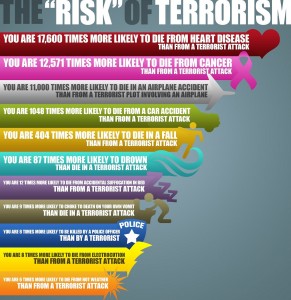 It doesn’t end there. There are earthquakes happening. Tsunamis are coming. There are burglars murdering pregnant pastor’s wives. There are mentally deranged killers walking on our college campuses.

There are thousands of people all over the world actively driving drunk. There are people who have no idea, but their bodies are filled with a sickness that will take their life at any second.How do we deal with this reality?

At the age of 19, Jonathan Edwards wrote 70 resolutions. As a young man he had a deep passion for the Lord and wanted to make sure that he lived a sold-out life for Him. One of his resolutions was mind-boggling. He said, “Resolved, to think much on all occasions of my own dying, and of the common circumstances which attend death.”

He believed that his life would be better off constantly thinking about his death and not only that, but the way he would die. He wanted eternity constantly on his mind.

I’m convinced that we have to live everyday as if it is our last. We should live with the knowledge that life is short and death is around the corner.

God allows evil in this world, and I believe it is an opportunity for us to remember that lives are short and that soon, very soon, we are going to meet our King. This in turn will propel us to store up for ourselves treasures in heaven, rather than live comfortable lives here on earth.

People all over the world walk to the store knowing that it could be their last, and yet in America we rarely look over our shoulders. Maybe those days are gone, maybe they will continue on for a while, but we would be fools to not take this opportunity to not only pray for Paris, but to also remind ourselves of the brevity of life and our need to focus on our eternal life rather than our temporary one.

Give your life to Jesus if you haven’t already, know and think about your death, think about the death of your loved ones, and neighbors and share the Gospel with them. It’s time for us to stop thinking “I’ll just do it tomorrow” and do it today because you’re not guaranteed another second.