Isis Is Us: The Shocking Truth Behind the Army of Terror 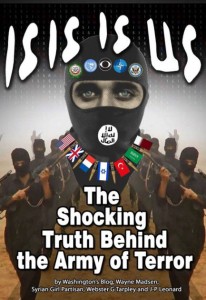 Did the “Islamic State” spring full-blown into spontaneous being as the fanatical scourge of the Middle East, or was it helped along by state sponsors? This is the basic question answered in the new book, Isis Is Us: The Shocking Truth Behind the Army of Terror.
Is Is there no end to the evil coming out of Washington? There are uncanny parallels with Iran-Contra. In the 1980s, the Reagan team wanted to topple the government of Nicaragua, using mercenaries, or death squads, based in Honduras. But Congress passed a law against it. So they went around by financing the Contras via Iran.

Thirty years later, the hawks in Washington wanted to topple the elected governments of Libya and Syria, crush the popular resistance in Iraq, and split up those countries on ethnic lines. Once again, they wanted to do this using death squads. So they got around Congress by having Qatar and the Saudis finance it.

To set up the Sunni and Shiite death squads to fight each other in Iraq, they sent John Negroponte as ambassador to Baghdad in 2004. The same guy they sent to Honduras as ambassador from 1981 to 1985. Then in 2011 they sent some of those killers from Iraq to Libya to overthrow Libyan leader Muammar Qaddafi, with NATO air cover. From Libya, they were sent to Syria to start the killing there.

The U.S. embedded media perversely pinned these killings on Libyan leader Bashar al-Assad, following the script for another NATO invasion. Only Russia’s UN veto spared Syria. So the sheikhs kept financing the “rebels” – and the U.S. pretended to fight them – until they grew into the ISIS terror army. They and their backers have still not quit.

Even Fox News is saying the U.S. coalition against ISIS is a myth. In a recent U.S. poll, just 18% think we have the upper hand in the “war on terror.” In a Syrian poll, 82% of respondents there said the U.S. and its allies created ISIS.

The wave of refugees, attacks in Paris and San Bernardino, and early reception to this book, indicate that people want an end to the “war on terror,” and they want to know what’s really going on.

European efforts to subjugate the Middle East go back to the British, Napoleon, the Crusades, the Romans, and Alexander the Great. The British knew the best way to permanently hold a territory was to settle it. This is how they beat the French in North America. The Old World was already well-settled, though. So to capture the Near East prize, England joined forces with Herzl’s Zionists. In 1917, their Balfour Declaration announced the plan for Jewish settlement in Palestine.

Another way to hold vast domains is divide and sow chaos, to smash them up into quarreling fiefdoms. And the cheapest way to get people to fight each other is with religion. British, French, Israeli and American strategists have all written plans to rule the Muslim world by breaking up all the Arab states along sectarian lines. That goal is what “ethnic cleansing,” Al Qaida, ISIS death squads, “Islamic jihad” terrorism, the Bushes’ wars on Iraq and even 9/11 are really all about.

Yes, it is depressing, but every American needs to know what is being done in his name. Even if it hurts.