Against the backdrop of the “Gay Pride” parade in Jerusalem, Israeli government officials have been verbally sparring with several prominent rabbis who insist homosexuals should rather be ashamed.

Rabbi Yigal Levinstein, head of the Bnei David yeshiva and a central figure in the pre-army preparatory education system for young religious Israelis, stated last week that homosexuals are “perverted.”

Levinstein went on to criticize the military brass for allowing the gay agenda to infiltrate the Israeli army. 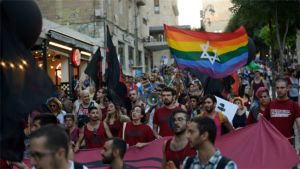 Rabbi Ratzon Arusi of Kiryat Ono (a recognized expert on Jewish Law) agreed that “homosexuality is not a natural thing,” and that the “gay pride” movement is harmful to everyone, especially homosexuals, most of whom are certainly not “proud or happy” about what he described as their condition.

Rabbi Dov Lior, a heavyweight in the national-religious community, called bringing “gay pride” to the streets of Jerusalem “an abomination,” and urged religious Israelis to “protest the desecration of the Holy City.”

Levinstein and those who stood with him earned quick condemnation from political figures, including Education Minister Naftali Bennett, who is himself a religious Jew.

“Jewish Law is meant to determine what is permitted and what is forbidden, it was not meant to serve as a tool to divide us or to single out people, identities or sectors,” Bennett told the Knesset plenum. “These comments are unacceptable in my opinion. This is not the way of the religious-Zionist movement.”

Public Security Minister Gilad Erdan added that Israelis must “respect every person: his choices, his identity, his belief. I believe this is also the role of rabbis.”

A number of high-profile rabbis decided to protest Levinstein’s remarks by attending the Jerusalem “Gay Pride” parade. Among them will be Rabbi Shlomo Riskin, chief rabbi of Efrat, who suggested that in regards to the Bible homosexuals are exempt from criminal responsibility because they were born with these tendencies.

Who won’t be marching in the parade is Jerusalem Mayor Nir Barkat, who appeared to criticize its offensive nature, while defending the right of homosexuals to conduct the event.

“I won’t be marching because I don’t want to be part of something that offends the religious population,” Barkat told reporters. “Of course it’s their right to march…but they need to know that it offends others. Tolerance isn’t just letting people march, it’s also looking for ways to achieve your goals without attacking other people’s feelings or opinions.”

Barkat also ordered that the “gay pride” rainbow flags that have been installed along streets throughout the city ahead of the parade be removed in the area of the Great Synagogue.