KINGSTON, Jamaica (BP) — Local authorities have charged one man and named another a “person of interest” in the April 30 murders of two American missionaries in Jamaica.

An arrest has been made in the April 30 murder of missionary Randy Hentzel (back, center) in Jamaica.

Andre Thomas, 25, was charged with murder and illegal possession of a firearm and ammunition in connection with the deaths of Randy Hentzel and Harold Nichols, the Jamaica Constabulary Force reported June 23 in a news release. Thomas was arrested in early June and also faces unrelated charges under Jamaica’s Sexual Offenses Act, according to the release.

Law enforcement officials have designated Dwight Henry, 25, a person of interest and asked him to contact detectives today (June 24). Anyone with information about Henry’s whereabouts has been asked to contact the authorities. 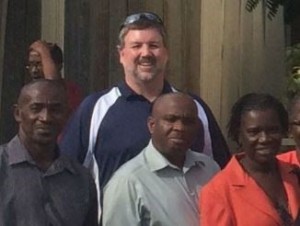 Missionaries with the Pennsylvania-based Teams for Medical Missions, Hentzel, 48, was a member of First Family Church in Ankeny, Iowa, a Southern Baptist congregation, and Nichols, 53, was a member of East Randolph (N.Y.) United Methodist Church.

First Family pastor Todd Stiles told Baptist Press, “After reading the report [of Thomas’ arrest], my heart was gladdened that justice appears to be moving in the right direction…. The family has found their solace in the Lord, and so while I’m confident they’re glad to see the authorities working on their behalf, I know the ultimate peace they have is in their Savior.”

Hentzel and Nichols were slain in a remote, rural area of Jamaica. The two men went for a motorcycle ride at approximately 8 a.m., and Hentzel’s body was found hours later beside a motorcycle in some bushes, according to an initial news release from the Jamaica Constabulary Force. Nichols’ body was found the next day in a separate area.

A May 3 release from the Jamaica Constabulary Force indicated Hentzel died of a gunshot would while Nichols’ body had a gunshot wound and “chop wounds.”

St. Mary parish, where the deaths occurred, is a region known for violence, according to media reports.