As of old, Israelis face flak for following Jesus 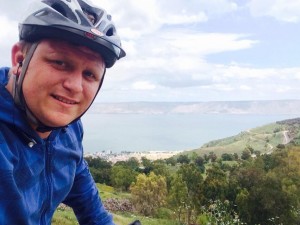 1) Zev Sigulim riding his bicycle near the Sea of Galilee 2) Ultra-Orthodox Jews on the streets of Israel to protest against government plans to draft them into the army.

GALILEE, ISRAEL (ANS) — It is an undisputed fact that the early followers of Jesus — who were mostly Jewish — came under fiery persecution, often from their own people.

Jesus himself was crucified and many of his disciples suffered similar fates, though more generally at the hands of the Romans.

However, the great apostle Paul was a leading Jewish rabbi who saw it as his duty to persecute the new movement, presiding over the stoning of St Stephen in the process…until his dramatic encounter with Christ on the road to Damascus.

In some respects, things have come full circle since then. Jewish people are once more recognizing Jesus as Messiah in significant numbers, and many are experiencing discrimination from their fellow Jews, especially in Israel.

Among them is Zev Sigulim, from Tiberias on the Sea of Galilee, who has witnessed seven years of harassment from Orthodox Jews and been forced to fly to Cyprus to get married because traditional rabbis refuse to recognize Messianic Jews! Some even refused to circumcise his sons.

This is an ongoing issue for many believers, and a campaign is underway to draw the government’s attention to this gross injustice. Being Messianic is also a potential hindrance to Jews from the diaspora making Aliyah (immigrating to Israel). And yet this does not apply to Jews who follow Buddhism or some New Age religion.

But the likeable young Zev is not himself caught up with any campaign for justice. He accepts that being a disciple of Yeshua (Hebrew for Jesus) has always been costly, and delights in a way of life totally informed by his faith.

From an Ultra-Orthodox background, Zev has five children and attends a congregation at Netanya on the Mediterranean coast – a one-hour drive away, quite a distance to travel each Sabbath.

A Polish Jew with blond hair and blue eyes, many of his ancestors perished in the Holocaust but his grandmother survived Auschwitz and the family moved to Israel. However, they subsequently emigrated to Toronto in Canada, where his father married a Gentile convert to Judaism and then made Aliyah to Israel, working for a Christian hi-tech company in Tiberias and becoming a secret Messianic Jew.

Tragically, he died soon afterwards in a car accident, but Zev’s mum had in the meantime noticed the change in his life and became sympathetic with this new movement in spite of opposition from the rest of the family – grandfather Jack disowned them.

Zev’s widowed mother — pregnant with her third child at the time of her husband’s death – was impressed by the compassion and witness of the Messianic Jews of Arad in the Negev desert and also became a believer. It was at Arad that Zev witnessed the constant harassment of Orthodox Jews protesting at their presence in the city.

“There were pickets outside our house for seven years,” he said, adding: “My two brothers and I are all believers in Yeshua. But I grew up ashamed of my faith. Worried about being spat at and barred from certain activities, I kept it to myself. Then, when I was at the Naval Academy, a friend saw me reading the Bible (which is actually very unusual for Jews) and scolded me for not telling him earlier of my faith, saying: ‘Think of all the conversations we could have had.’

“It hit me that I had wasted my time and I prayed that God would give me boldness and opportunities to speak of Yeshua. Inevitably, my faith grew.”

Pointing out that 95% of Messianics have come to faith through non-Jews, Zev encourages Gentiles to share the gospel with Jews, but worries that most Christians don’t know enough about the Old Testament, which is essential for such witness.