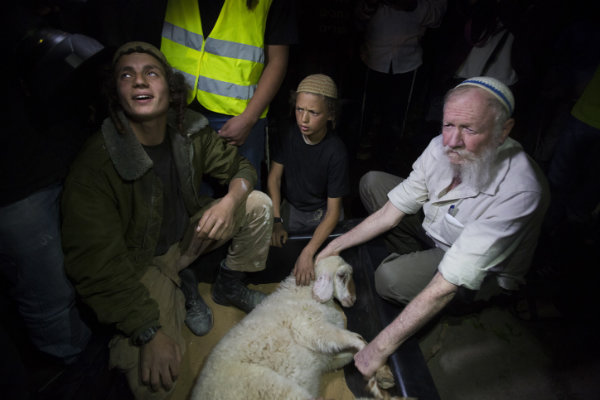 A group of eight Israeli Jews were arrested recently while attempting to ascend the Temple Mount and sacrifice a goat there in fulfillment of the biblical instructions regarding the Passover holiday. Several organizations associated with the group told Israel National News that the arrests were yet another indication of the total lack of religious freedom for Jews atop the Temple Mount, Judaism’s holiest site.

That same Temple Mount again exploded in violence on the followng Wednesday morning when Muslim mobs assaulted police and Jewish visitors. The violence began as police opened the Mughrabi Gate, the sole entrance where non-Muslim visitors can enter the Temple Mount. Muslim rioters waiting on the other side of the gate hurled stones and firecrackers, prompting Israeli police to respond with rubber bullets and tear gas.

One police officer and dozens of rioters were injured in the melee, and the Temple Mount was quickly closed again to all non-Muslims. It was the second such outburst of violence that week.

On Sunday, two Israeli police officers were wounded when Muslim rioters attacked them and possibly other Jewish visitors at the Mughrabi Gate. One observer noted that the use of dozens of firebombs (Molotov cocktails) indicated that the riot had been premeditated, and was not a spontaneous response to some Israeli provocation.

Last week, two American congressmen clandestinely visited the Temple Mount with a group of religious Jews to assess the situation. US Rep. Bill Johnson (R-OH) told Israel National News that the Temple Mount visit left he and his colleague “shocked and disturbed.”

Johnson made special note of the Waqf (Islamic Trust) official that tailed the group and seemed to exercise unwarranted influence over the Israeli police present there. “This thug followed us everywhere we went and if we stopped and took too long in one place he would look at the Israeli police, who would say ‘you need to keep your group moving,’” noted the American lawmaker.