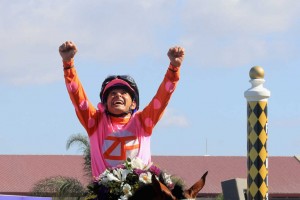 It was one of the best times of jockey Mike Smith’s life after he claimed the 144th Kentucky Derby title in early May, then the 143rd Preakness less than three weeks later. Smith’s astonishing achievement came on the back of the racehorse Justify. Despite winning the biggest competition in the horse-racing world, Smith immediately gave all the glory to God for his remarkable performance.

“I want to thank my Lord and Savior Jesus Christ for this blessing on this afternoon and blessing us with this amazing horse,” he said immediately following the epic race. “I can’t describe how special this horse is, my vocabulary doesn’t have the words for it.”

Justify is the first horse to win the Kentucky Derby without first racing as a 2-year-old since the horse Apollo in 1882, according to CNS News.

“He’s got that ‘it’ factor,” Smith said. “He’s just so above average. He’s got unbelievable talent, and then he’s got a mind to go with it. He was loving this stuff. He’s crazy for such a young horse, he’s just so big and talented.”

According to Horse Racing Nation, “The Kentucky Derby might be the most popular horse race in the world and definitely one of the most important sports events in the United States of America, it is also known as ‘The Most Exciting Two Minutes In Sports’ or ‘The Fastest Two Minutes in Sports.’”

Justify’s ownership team will receive a sizable cash prize as a result of their horse’s superior performance: about $1.24 million of the $2 million earnings. According to CNBC, 52-year-old Smith will be presented with a check for around $124,000. Not bad for a couple minutes’ work!

But it hasn’t been an easy climb for Smith. Despite being one of the world’s top jockeys for a number of years, he has suffered a series of severe injuries that threatened to end his riding career. According to Hollywood Life, back in 1998, Mike suffered two separate falls which almost forced him to hang up his riding boots for good.

A broken shoulder put him on the sidelines for two months. Then, just five months later, he fell badly, breaking his back. He was out of action for another six months following before he could finally get back in his saddle.

Smith began his horse riding career when he was just 16 years old. He is the second highest earner in horse racing history and has amassed total earnings of over $310 million through winning 5,456 races. He has won several accolades for his riding mastery including the George Woolf Memorial Jockey Award, the Eclipse Award for Outstanding Jockey, the Best Jockey ESPY Award and the Mike Venezia Memorial Award.