John Podesta, former secretary of state Hillary Clinton’s 2016 national campaign chairman, may have violated federal law by failing to disclose the receipt of 75,000 shares of stock from a Kremlin-financed company when he joined the Obama White House in 2014.

The outlet also states that Podesta appears to be linked to a $35 million transaction between a Kremlin-funded company and a company he sat on the board of. 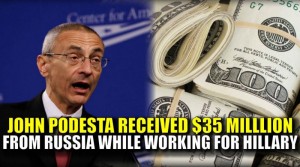 Making these claims is none other than Breitbart editor Peter Schweizer – the author of “Clinton Cash.” Speaking on Fox & Friends, Schweizer said the following:

Now, what is Rusnano? It’s not a private company. It is directly funded by the Kremlin. In fact, the Russian science minister called Rusnano Putin’s child.

So, you have the Russian government investing in one John Podesta’s business in 2011, while he is an advisor to Hillary Clinton at the State Department. It gets deeper. Schweizer went on to point out that Podesta went to the White House in 2013 “to be a special counselor to Barack Obama.”

He said: “That requires that you have financial disclosures every year. In his financial disclosure form in 2013, [Podesta] not only fails to disclose these 75,000 shares of stock that he has in Joule Energy which is funded in part by the Russian government. He also fails to disclose that he is on one of the three corporate boards that this entity has. It’s got this very complex ownership structure.

“He discloses he is on the company in Massachusetts, that he is on the board of a company in the Netherlands, but he fails to disclose that he is also on the executive order of the holding company. That’s a clear violation of the disclosure rules that needs to be looked at.”