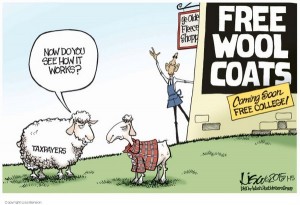 A snowman was seen at the carrot bin in the produce section of the local grocery. He was picking his nose.

The efficiency expert concluded his lecture with a note of caution: “You do not want to try these techniques at home!” “Why not?” asked a man from the audience. “After years of not paying attention, I suddenly noticed my wife’s routine at breakfast,” the expert explained. “She made lots of trips to the refrigerator, stove, table and cabinets; often she carried just a single item at a time. So, I asked her, ‘Hon, why don’t you try carrying several things at once? It’d be much more efficient.'” “Well, did your suggestions save much time?” the attendee asked.

“Actually, yes,” the efficiency expert responded. “It used to take her twenty minutes to get breakfast ready. Now I do it in seven.”

A farmer asked the vet to come out to check on his favorite bull who wasn’t doing well at all. After checking the bull’s vital signs, the vet reached in his black bag and pulled out a rather large pill. He forced open the bull’s mouth and crammed the pill down his gullet. Suddenly the bull jumped up and took off like a banshee, jumping every fence in his way. The vet exclaimed, “Well, looks like your bull is healed!” The farmer replied, “Now give me one of those pills. I’ve gotta catch him!”

$chool i$ really great. I’ve made lot$ of friend$ and am $tudying hard. With all my $tuff, I $imply can’t think of anything I need, $o if you would like you can ju$t $end me a card, a$ I would love to hear from you.

I kNOw that astroNOmy, ecoNOmics, and oceaNOgraphy are eNOugh to keep even an hoNOr student busy. Do NOt forget that the pursuit of kNOwledge is a NOble task, and you can never study hard eNOugh.

At a former job on Boss Day, my direct reports got together and bought a beautiful small, engraved plaque telling me they appreciated my leadership. At the bottom of the plaque was engraved a scripture reference. I went to the Bible Gateway to look it up. What they intended was 1 Thess. 1:3, “We remember before our God and Father your work produced by faith, your labor prompted by love, and your endurance inspired by hope in our Lord Jesus Christ.

What the engraver wrote instead was 1 Thess 3:1, which reads “So when we could stand it no longer, we thought it best to be left by ourselves in Athens. My assistant heard me laughing and I told her what it said. A few minutes later the red-faced manager who had ordered the plaque came to retrieve it. It was fixed the same day. I still laugh every time I think about that one.

The next time you feel like God can’t use you, just remember…

~ Noah was a drunk ~ Abraham was too old ~ Isaac was a daydreamer ~ Jacob was a liar ~ Leah was ugly ~ Joseph was abused ~ Moses had a stuttering problem ~ Gideon was afraid ~ Samson had long hair and was a womanizer ~ Rahab was a prostitute ~ Jeremiah and Timothy were too young ~ David was an adulterer and a murderer ~ Elijah was suicidal ~ Jonah ran from God ~ Naomi was a widow ~ Job went bankrupt ~ John the Baptist ate bugs ~ Peter denied Christ ~ The disciples fell asleep while praying ~ Martha worried about everything ~ The Samaritan woman was divorced (more than once) ~ Zaccheus was too small ~ Paul was too religious ~ Timothy had an ulcer ~ Lazarus was dead! “The power of the Church is not a parade of flawless people, but of a Christ who embraces our flaws. The Church is not made up of the whole people, rather of the broken people who find wholeness in a Christ who was broken for us.”

A groom wanted to surprise his bride on their wedding day so he arranged with the bakery to have a Bible verse inscribed on the cake. He chose 1 John 4:18, which reads: “There is no fear in love. But perfect love drives out fear, because fear has to do with punishment. The one who fears is not made perfect in love”. But the baker, not being familiar with the Bible, got the verse wrong and on the day of his wedding the groom was surprised to find the cake inscribed with John 4:18, which read: “You are right when you say you have no husband. The fact is, you have had five husbands, and the man you now have is not your husband.”

College meals are generally unpopular with those who have to eat them, and sometimes with good reason.

“What kind of pie do you call this?” asked one student indignantly to the cafeteria attendent. “What’s it taste like?” asked the cook. “Glue!” “Then it’s apple pie. The plum pie tastes like soap.”

7. “Look around, baby. All the other guys around here are animals!”

4. “Why don’t you come over to my place and we can name some animals?”

And the number one pick up line from Adam is:

A man wrote a letter to a small hotel in a town he planned to visit on his holiday. He wrote: I would very much like to bring my dog with me. He is well-groomed and very well-behaved. Would you be willing to permit me to keep him in my room with me at night? An immediate reply came from the hotel owner, who wrote: Sir, I’ve been operating this hotel for many years. In all that time, I’ve never had a dog steal towels, bedclothes, silverware or pictures off the walls. I’ve never had to evict a dog in the middle of the night for being drunk and disorderly. And I’ve never had a dog run out on a hotel bill. Yes, indeed, your dog is welcome at my hotel. And, if your dog will vouch for you, you’re welcome to stay here, too.

He said, “Yes.” I called Bill Gates and said, “I want your daughter to marry my son.” Bill Gates said, “No”.

Did you know that dolphins are so smart that within a few weeks of captivity, they can train people to stand on the very edge of the pool and throw them fish? ~ I find it ironic that the colors red, white, and blue stand for freedom until they are flashing behind you. ~ Experience: The name people give to their mistakes. ~ God’s faithfulness always surpasses our unfaithfulness. ~ America is the only country where a significant proportion of the population believes that professional wrestling is real but the moon landing was faked. ~ A thief broke into my house last night. He started searching for money so I woke up and searched with him. ~ I worked at Starbucks, but had to quit because it was the same old grind. ~ How to prepare Tofu: 1. Throw it in the trash 2. Grill some meat! ~ Blessed are the peacemakers — they will never be out work. ~ Myrrh: A type of perfume or incense; the second gift of the Magi; a great scrabble word when you are out of vowels. ~ I just read that 4,153,237 people got married last year. Not to cause alarm or worry, but shouldn’t that be an even number? ~ I just did a week’s worth of cardio after walking into a spider web.