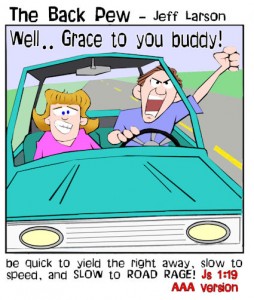 A tourist stopped a local in a village he was visiting and asked, “What is the quickest way to the lake?” The local thought for a while. “Are you walking or driving?” he asked the tourist. “I’m driving.” “Thats the quickest way.”

A young man, who was also an avid golfer, found himself with a few hours to spare one afternoon. He figured that if he hurried and played very fast, he could get in 9 holes before he had to head home. Just as he was about to tee off, an old gentleman shuffled onto the tee and asked if he could accompany the young man as he was golfing alone. Not being able to say no, he allowed the old man to join him. To his surprise, the old man played fairly quickly. He didn’t hit the ball far, but plodded along consistently and didn’t waste much time. Finally, they reached the 9th fairway and the young man found himself with a tough shot. There was a large pine tree right in front of his ball and directly between his ball and the green. After several minutes of debating how to hit the shot, the old man finally said, “You know, when I was your age, I’d hit the ball right over that tree.” With that challenge placed before him, the youngster swung hard, hit the ball up, right smack into the top of the tree trunk and it thudded back on the ground not a foot from where it had originally laid. The old man offered one more comment, “Of course, when I was your age, that pine tree was only 3 feet tall.”

Scott is in Trouble

Bill, Jim, and Scott were at a convention together and were sharing a large suite on the top of a 75-story skyscraper. After a long day of meetings they were shocked to hear that the elevators in their hotel were broken and they would have to climb 75 flights of stairs to get to their room. Bill said to Jim and Scott, “Let’s break the monotony of this unpleasant task by concentrating on something interesting. I’ll tell jokes for 25 flights, and Jim can sing songs for 25 flights, and Scott can tell sad stories the rest of the way.” At the 26th floor Bill stopped telling jokes and Jim began to sing. At the 51st floor Jim stopped singing and Scott began to tell sad stories. “I will tell my saddest story first,” he said. “I left the room key in the car.”

A little boy in a store had been pawing over a stock of greeting cards for some time when a clerk asked, “Just what is it you’re looking for? A birthday greeting, message to a sick friend, anniversary or a congratulations to your mom and dad?” The boy shook his head and answered, “Got any like a blank report card?”

Steve phoned his dentist when he received a huge bill. “I’m shocked!”  he complained. “This is three times what you normally charge.” “Yes, I know,” said the dentist. “But you yelled so loud, you scared away two other patients.”

We Reap what we Sow

A young woman brought her fiance home to meet her parents. After dinner, her mother told her father to find out about the young man. The father invited the fiancé to his study for a talk. “So what are your plans?” the father asked the young man. “I am a biblical scholar,” he replied. “A biblical scholar, hmmm?” the father said. “Admirable, but what will you do to provide a nice house for my daughter to live in?” “I will study,” the young man replied, “and God will provide for us.” “And how will you buy her a beautiful engagement ring, such as she deserves?” asked the father. “I will concentrate on my studies,” the young man replied, “God will provide for us.” “And children?” asked the father. “How will you support children?” “Don’t worry, sir, God will provide,” replied the fiance. The conversation proceeded like this, and each time the father questioned, the young idealist insisted that God would provide. Later, the mother asked, “How did it go, honey?” The father answered, “He has no job and no plans, and he thinks I’m God.”

A farmer lived in Minnesota, right on the border with Iowa.  One day he saw a team of surveyors working along the road.  They measured and argued and measured again.  Finally they came up to the farm house. “Sir, we have some news for you,” they said. “It looks like the old map was completely wrong about the border. Your farm is actually in Iowa!” “That’s wonderful!” cried the farmer, “No more of those terrible Minnesota winters!”

On one particular Sunday, the pastor was emphasizing the importance of everyone giving their tithes and offerings. He went on to challenge the people to give enthusiastically because 2 Corinthians 9:7 says in it that “God loves a cheerful giver.” As the plate was passed, a little boy in the second pew, quickly slipped off his neck tie and placed it into the offering plate. His mother, absolutely mortified, asked him what in the world he thought he was doing.

The boy replied, “The pastor said put your ties in the offering plate and do it joyfully. I love that man!”

I’d been working on my business degree for about a year when I finally got to take a popular finance course. I went to the bookstore to buy the text and was shocked to find out that it would cost me $96. I asked how much it was worth if I sold it back at the end of the semester. “You’ll get $24,” said the clerk. “This is insane,” I protested as I wrote out the check. “I know,” replied the clerk sympathetically. “I’ve always thought that a person who buys a book for $96 and then sells it back for $24 should fail the course.”

A burglar broke into the home of a good Quaker gentleman. From upstairs, the Quaker heard the noises below and realized there was an intruder. He took his hunting rifle to the top of the stairs and announced: “Friend, I mean to do thee no harm, but where thou standest is where I am about to shoot.”

A Texan was taking a taxi tour of London and was in a hurry. As they went by the Tower of London the cab driver explained what it was and that construction of it started in 1346 and was completed in 1412. The Texan replied, “Shoot, a little ol’ tower like that? In Houston we’d have that thing up in two weeks!” Next they passed the House of Parliament – started in 1544 and completed in 1618. “Well boy, we put up a bigger one than that in Dallas and it only took a year!” As they passed Westminster Abbey the cab driver was silent. “Whoah! What’s that over there?” asked the Texan. The driver replied, “I don’t know, it wasn’t there yesterday.”

We all know them. How to describe someone who’s…uh…you know…

– A few peas short of a casserole. – Doesn’t have all his cornflakes in one box. – Gates are down, the lights are flashing, but the train isn’t coming. – Body by Fisher; brains by Mattel. – Couldn’t pour water out of a boot with instructions on the heel. – Slinky’s kinked. – Surfing in Nebraska.

– Too much yardage between the goal posts. – Big like ox; smart like tractor. – Room temperature IQ. – One tire short of a Goodyear. – Three dots short of an ink-blot test. – Forgot to use the surge protector. – The mental agility of a used soap dish.

Satan is a Cheater

St. Peter and Satan were having an argument one day about baseball. Satan proposed a game to be played on neutral grounds between a select team from the heavenly host and his own hand-picked boys. “Very well,” said the gatekeeper of Heaven. “But you realize, I hope, that we’ve got all the good players and the best coaches.” “I know, and that’s all right,” Satan answered. “We’ve got all the umpires.”

Three burly fellows on huge motorcycles pulled up to a highway cafe, where a truck driver, just a little guy, was perched on a stool quietly eating his lunch. As the three fellows came in, they spotted him, grabbed his food away from him, and laughed in his face. The truck driver said nothing. He got up, paid for his food, and walked out.

One of the three cyclists, unhappy that they hadn’t succeeded in provoking the little man into a fight, commented to the waitress: “Boy, he sure wasn’t much of a man, was he?” The waitress replied, “Well I guess not.” Then, looking out the window, she added, “I guess he’s not much of a truck driver, either. He just ran over three motorcycles.”

When I get a headache, I take 2 aspirin and keep away from children, just like the label says. ~

Instead of cleaning the house, I just turn off the lights. ~ Sometimes I wake up grumpy; other times I let him sleep ~ When you try to show that something doesn’t work, it will. ~ The easiest way to grow wise and good is to be around people who are wiser and better than you. ~ I’d be an ideal mother if it wasn’t for my kids. ~ A mother can touch a whole generation just by loving her own child well. ~ I’ve lost my mind and I’m pretty sure my kids took it! ~ If we weren’t meant to juggle, tennis balls wouldn’t come three in a can. ~ Success is when you look back at your life and the memories make you smile. ~ Is it wrong that only one company makes the game Monopoly? ~ They say, “Wisdom comes with age,” but sometimes age comes alone. ~ The trouble with talking too fast is that you might say something you haven’t thought of yet. ~ A baby first laughs at the age of four weeks. By that time his eyes focus well enough to see you clearly.