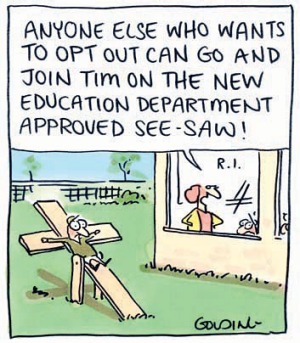 ~ You believe the staff room should be equipped with a Valium salt lick. ~ You want to slap the next person who says, “Must be nice to work from 8 to 3 and have your summers free!” ~ You can tell it’s a full moon without ever looking outside. ~ You believe “shallow gene pool” should have its own box on the report card. ~ When out in public you feel the urge to talk to strange children and correct their behavior.

~ You have no time for a life from August to June. ~ You think people should be required to get a government permit before being allowed to reproduce. ~ You encourage an obnoxious parent to check into charter schools or home schooling. ~ You think caffeine should be available to staff in IV form. ~ Meeting a child’s parents instantly answers the question: “Why is the kid like this?” ~ You laugh uncontrollably when people refer to the staff room as the “lounge.”

A fool takes no pleasure in understanding…

A friend told an airhead: “Christmas is on a Friday this year.” The airhead replied, “Let’s hope it’s not the 13th.” ~  A man is in the bathroom and his wife shouts: “Did you find the shampoo?” He answers, “Yes, but I’m not sure what to do… it’s for dry hair, and I’ve just wet mine.”  ~ An airhead goes to the vet with the pet goldfish. I think it’s got epilepsy,” the airhead tells the vet. The vet takes a look and says, “It seems calm enough to me.” The airhead replies, “Wait, I haven’t taken it out of the bowl yet”. ~ An airhead spies a letter lying on the doormat. It says on the envelope “DO NOT BEND” – spends the next 2 hours trying to figure out how to pick it up. ~ A man shouts frantically into the phone, “My wife is pregnant and her contractions are only two minutes apart!”  “Is this her first child?” asks the doctor. “No”, he shouts, “this is her husband!”  ~ A passerby asks an airhead: “Why do scuba divers always fall backwards off their boats?”

To which the blonde man replies: “If they fell forward, they’d still be in the boat.”

Fear not, for I am with you…

I hate the idea of going under the knife. So I was very upset when Dr. Dr. Mike Wilson told me I needed a tonsillectomy. Later, the nurse and I were filling out an admission form. I tried to respond to the questions, but I was so nervous I couldn’t speak. The nurse patted my hand and said, “Don’t worry. This medical problem can easily be fixed, and it’s not a dangerous procedure.” “You’re right. I’m being silly,” I said, “Please continue.” “Good,” the nurse went on, “Now, do you have a living will?”

A woman needed encouragement to keep pedaling the exercise bike in her gym. So my friend, the gym manager, said, “Close your eyes and imagine you’re riding along Broadway in New York City. It will be more interesting.” Inspired, the woman cycled on, but after a minute she stopped. “What’s wrong?” asked my friend. “The traffic light’s red,” she replied.

~ It’s okay…I’m still billing the client. ~ They told me at the blood bank this might happen. ~ This is just a 15-minute power-nap like they raved about in the last time management course you sent me to. ~ I was working smarter, not harder. ~ Whew! Guess I left the top off the liquid paper. ~ I wasn’t sleeping! I was meditating on the mission statement and envisioning a new paradigm!  ~ This is one of the seven habits of highly effective people! ~ I was testing the keyboard for drool resistance. ~ I’m in the management-training program.

The Best Coffee Around

In our home we tend to get the children to help out. One day our youngest son came in to the living room and asked, “Does anyone want a cup of coffee?”  “Yes, please,” we said. He asked, “What kind of coffee do you want? Capitated or decapitated?”

Aardvark: Aan aanimal thaat resembles the aanteater ~  Bat: An air-minded mouse ~ Cell Phone: How Amoebas communicate ~ Diploma: Da man dat fixes your pipes ~ Europe: Next one to bat ~ Fork: Eating utensil made obsolete by the discovery of fingers ~ Graveyard Shift: What takes place when an earthquake hits a cemetery ~ Highbrow: A person educated beyond his intelligence ~ Install: Where you keep your horse ~ Joan of Arc: Noah’s wife ~ Letter: A form of composition opening with an excuse for not opening sooner and closing with an excuse for not closing later ~ Mammoth: Giant flying bug thing.

A bank is a place that will lend you money if you can prove that you don’t need it. ~ Going to church doesn’t make you a Christian any more than standing in a garage makes you a car. ~ Prayer is asking for rain. Faith is carrying an umbrella. ~ Skinny people are easier to kidnap. Stay safe – eat cake and ice cream. ~ Where there’s a will, I want to be in it. ~ Where do forest rangers go to “get away from it all”? ~ A healthy adult consumes each year one-and-one-half times his own weight in other people’s patience. ~ Advice is like cooking – you should try it before you feed it to others. ~ Birthday cake is the only food you can blow on and spit on and everybody rushes to get a piece. ~ I think senility is going to be a fairly smooth transition for me.

Praying for the Deer

The Wednesday-night church service coincided with the last day of hunting season.  Our pastor asked who had bagged a deer.  No one raised a hand.  Puzzled, the pastor said, “I don’t get it. Last Sunday many of you said you were missing because of hunting season. I had the whole congregation pray for your deer.”  One hunter groaned, “Well, it worked. They’re all safe.”

There’s a fine line between fishing and standing on the shore like an idiot. – When the going gets tough, everyone leaves. – THINK! It gives you something to do while the computer is down. – Let God be God. He will be anyway. – Life isn’t about how fast you run, or how high you climb; it’s about how well you bounce. – Of course I talk to myself, sometimes I need expert advice. – The biggest problem with the younger generation these days is that I don’t belong to it any more. – The 50-50-90 rule: Anytime you have a 50-50 chance of getting something right, there’s a 90% probability you’ll get it wrong.