Judge: Gruber, Obama Administration Should Be Charged With Conspiracy to Commit Fraud to Pass Obamacare

by J. D. Heyes
(NaturalNews) A former judge has come out heavily against President Obama, former House Speaker Nancy Pelosi, D-Calif., and MIT economist and Obamacare architect Jonathan Gruber for the administration’s and congressional Democrats’ total lack of transparency and outright deception in getting the overly bureaucratic Affordable Care Act passed into law.

Judge Jeanine Pirro, host of FOX News Channel’s Justice, also said anyone involved in deceiving the public in a bid to convince voters to support the law ought to be charged with fraud.

“They think you’re stupid, that they can pull the wool over your eyes, they know more than you do and that they know what’s good for you, and it’s best to simply keep you in the dark,” Pirro said on her program recently, just days after videos surfaced featuring Gruber disparaging the “stupidity” of American voters and extolling the necessity to keep voters in the dark about what the law really would — and would not — do.

“But the biggest problem with not only healthcare — but with everything this administration does — is that there is no transparency,” Pirro said.

Here is more from her show opening:

Pirro: So… are you stupid?

Jonathan Gruber: “And they proposed it and that passed, because American voters are too stupid to understand the difference.”

“Lack of transparency’s a huge political advantage. And basically, you know, call it the stupidity of the American voter or whatever but basically that was really, really critical to get anything to pass.”

They think you’re stupid, that they can pull the wool over your eyes, they know more than you do and that they know what’s good for you, and it’s best to simply keep you in the dark.

So why lie to the American people — and make no mistake, we were lied to — starting with “you can keep your healthcare plan and your doctor” to “this is not a tax, it’s a penalty.”

But think about it — how could we possibly have a law that would cover millions more with no added cost to you? After all — you’re the one who always gets squeezed.

And — with the president’s impending executive action on immigration — might you be the one to pay for healthcare for those additional five million illegals?

Yet no one talks about increasing the number of doctors or enrollment in medical schools to cover all these new patients.

The White House says they don’t agree with what the Obamacare architect said, Yet records confirm that Gruber spent time at the White House.

And Gruber himself has said he visited with Obama twice, including in the Oval Office, to discuss the law.

Not so, says the same president who told lie after lie about the law between 2008-2009.

“I just heard about this. I get well-briefed before I come out here. The fact that some adviser who never worked on our staff expressed an opinion that I completely disagree with in terms of the voters, is no reflection on the actual process that was run,” Obama said in response to a question from FOX News correspondent Ed Henry, while the president was in Brisbane, Australia. 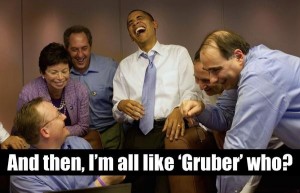 This is a familiar tactic for Obama — claim ignorance, feign outrage and promise to get to the bottom of it. Only nothing ever gets settled, no one is ever held to account, and nothing changes.

For her part, Pelosi cited Gruber during a 2009 press conference as being an “expert” in healthcare policy; in recent days, after Gruber’s disparaging comments became public, she denied knowing him at all.

“Americans are honest people. We respect authority and believe our commander-in-chief would only tell the truth, never thinking he would lie,” said Pirro. “Now it may be my background — but when someone lies and admits they perpetrated a fraud and picks a victim they think they can fool, which costs that victim money, they should be prosecuted for fraud. When more than one person is involved and there are meetings on how to perpetuate the fraud, it becomes a conspiracy.”

(NaturalNews) MIT economic scientist Jonathan Gruber is a devious liar who got paid millions of taxpayer dollars to help engineer key Obamacare deceptions that got the law passed. The now-infamous Gruber helped Obamacare architects exploit “the stupidity of the American voter” to get Obamacare passed — a law which is now causing health insurance rates to skyrocket across the nation.

A new video compilation of Gruber’s lies and the ongoing deceptions of President Obama and Nancy Pelosi has just surfaced, and it’s spreading faster than Ebola.  youtube.com/watch?v=kDomkBtJC7Q

The video hilariously features Obama first bragging about how he “liberally stole ideas” from Jonathan Gruber, followed by Obama’s obviously deceitful denials that Gruber had anything to do with Obamacare at all, really. Democrats are running from Gruber faster than a busload of sick tourists stampeding for public toilets after an encounter with Montezuma’s Revenge.

Up until the day Gruber was caught on video explaining how stupid the American voters were, democrats all but fell over each other in a race to heap praise upon Gruber as an economic genius. This is all part of the elitist socialism system of total stupidity: pick out the most fast-talking hucksters from MIT, Harvard and Yale, then position them as geniuses who can do no wrong, even if their ideas are based on pure nonsense.

Nowhere is there more bull manure shoveled on a more regular basis than in the realm of economics, where the most important qualification to work for the federal government is to be a really good liar.