Judge orders straight-pride opponents: Get out of city 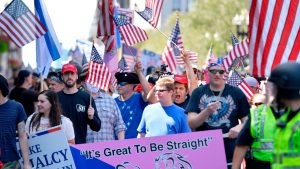 Gay-pride parades initially were a stunning display of support for an alternative sexual lifestyle but now have become common. Not so with “straight-pride” parades, one of which was held in Boston on Aug 31st. The event drew violent protesters, with police arresting 36.

On the following Tuesday, Judge Thomas Horgan told three of the suspects in court they must stay out of Boston while their cases develop or face 90 days in jail. The warnings were issued to Timothy Rego, Benjamin Boyd and Kenneth Kraft Jr., who were arrested on Saturday. Horgan said he would not even allow them to enter the city to visit relatives. The Boston Herald reported the three were arraigned on charges of assault and battery on an officer. All pleaded not guilty.

CNN reported over the weekend the protesters “taunted marchers.” CNN said the parade was at about noon at Copley Square and later ended at City Hall Plaza. “Floats and signs expressed pro-military and pro-Trump sentiments, such as ‘Support our troops’ and ‘Build the wall and crime will fall,'” the report said.

The opposition was virulent. “I’m outraged by the idea that straight people need a pride parade,” said Shoshanna Ehrlich. “This is full of hate and offensive.”

Horgan said the three banished from the city are allowed back only for court dates and appointments with their lawyers. Others were arraigned on other charges, with another judge refusing to dismiss counts against them, even though they were mostly disorderly conduct and the like. The suspects are due back in court in November.