Just Beggin’ For The Wrath of God

Oh-ho-ho America, you are just BEGGING for the wrath of the Holy God to fall on you! Could this country BE more pagan? Could we possibly tempt the Lord God Almighty in more ways?! Last week, the heathen goddess Kali was projected onto the side of the Empire State Building in New York City. Gee. Great idea.

The Times of India online reported “Artist Android Jones designed the portraits of the goddess to make the point that Mother Nature, now more than ever, needs a fierce avatar to fight the dangers of pollution and extinction.” I hate to tell you people in New York City, but pollution is going to be the least of your worries! I’d seriously consider getting the heck out of there as soon as possible to avoid the coming judgment. 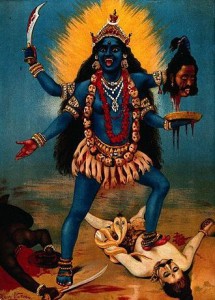 This filthy entity is the Hindu goddess of time, change, power, destruction and death. She is also known as the Dark Mother, and her colorful display was considered around the world to be a “breathtaking spectacle” and was promoted in the name of art. Millions of people in India and other countries worship this demonic goddess and take her powers very seriously.

Anytime a country lifts up idols, they bring disease, poverty and death. Perhaps this is why 21st century India still struggles with the concept of indoor plumbing. Just sayin’…

Since the beginning of time, mankind has perverted and misdirected our God designed instinct to worship a transcendent being. We were made in God’s image for the purpose of enjoying a give-and-take love relationship with our Creator, but the enemy slithered in and introduced the idea that we can chose to worship other things besides God.

Can you even begin to fathom how offensive and hurtful this is to our Heavenly Father?! What if your beloved, cherished toddler decided to run up to some unknown adult and hold their chubby little arms up to cuddle with them instead of you? What if that baby looked at you with derision and said “I hate you! I want THIS lady to be my Mommy—NOT you!”

You’d be crushed! You’d be horrified and enraged and panicked all at the same time, especially if that other man or woman was willing to walk away with your precious little one, and you knew they had every intention of hurting or even killing your child!

This is what we do to our Father when we put anything or anyone on the pedestal of our heart before Him. We crush Him and as He cries, we flagrantly dance around our new idol, singing its praises and showing it off to our friends. “Look at my new car!” “Check out the house we’re getting!” “I’d like you to meet my new boyfriend.” “I’m going to do everything in my power to get that job I want!” And so on.

After a while, any parent would get weary of being abused and taken for granted. God is no different. Not only does He give individuals the freedom to choose who they will worship, He does the same for nations. However, there are consequences to those decisions and they’re spelled out clearly in the Bible.

“Ye shall make you no idols nor graven image, neither rear you up a standing image, neither shall ye set up any image of stone in your land, to down unto it: for I am the Lord your God.” Leviticus 26:1 (KJV) This verse and many others pertaining to idols are usually filled with “If/Then” statements from God. IF you do this, THEN I’ll do this. But IF you do this other, THEN I’ll do that.

For instance, the Lord tells Israel that IF they walk in His statues and keep His commandments, THEN He will give them rain, bless their crops and vineyards, ensure peace in their land, get rid of dangerous beasts, and give them great victory over any enemies that come against them and make sure they have lots of healthy babies. Leviticus 26:12 “And I will walk among you, and will be your God, and ye shall be my people.” (KJV)

However, the flip side ain’t so pretty. God goes on to warn them in verses 14-16 “But if ye will not hearken unto me, and will not do all these commandments; and if ye shall despise my statutes, or if your soul abhor my judgments, so that ye will not do all my commandments, but that ye break my covenant: I will do this unto you…” (KJV)

Ho-boy, check it out. When nations refuse to obey God, He says He’ll bring to the land sudden terror, killer diseases, invasion from foreign enemies who will plunder and eat their food, instill paranoia in the hearts of the people, crops will fail, wild beasts will kill the children and cattle, war and slaughter will come, and God will not hear their prayers for relief.

It gets worse! If these calamities sent by God to chastise the nation don’t cause them to repent and turn back to Him, He will cause such famine in the land that the people will cannibalize their own children, and cause such destruction to the cities and land, that even their enemies will be astonished and appalled. Then, He will finally scatter the few survivors among the nations.

“And they that are left of you shall pine away in their iniquity in your enemies’ lands…” Leviticus 26:39 (KJV) Yeah, I know these things were spoken to ancient Israel, but God deals the same way with all nations. He’s extremely longsuffering and patient but that patience does run out—then BAM! Watch out! 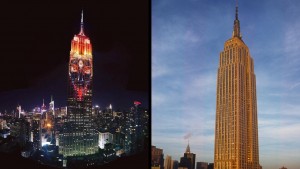 That is where America is today. We’re just about to experience what we’ve never known before: great natural destruction, devastation, famine, diseases, war, economic collapse, massive, widespread civil violence and crime, and invasion by our enemies. These things ARE coming and very soon. You can laugh and scoff all you want, but it won’t change things.

In the book of Jonah, God was planning on wiping Nineveh off the map because of their gross sins against Him. After the Lord yanked a knot in Jonah’s tail and he went to the town to warn them like he had been instructed to do, the ENTIRE city did something I’ve never heard of happening since.

“For word came unto the king of Nineveh and he arose from his throne, and he laid his robe from him, and covered him with sackcloth and sat in ashes. And he caused it to be proclaimed and published through Nineveh by the decree of the king and his nobles, saying, ‘Let neither man nor beast, herd nor flock, taste any thing: let them not feed nor drink water: but let man and beast be covered with sackcloth, and cry mightily unto God: yea, let them turn every one from his evil way, and from the violence that is in their hands. Who can tell if God will turn and repent, and turn away from His fierce anger that we perish not?'” Jonah 3:6-9 (KJV)

The Bible tells us that God saw what they did and how they were repentant in their hearts, and He didn’t destroy them. That’s what it took for God’s anger to cool enough to pull back from His plan to utterly annihilate them.

Now. Can you honestly see Obama putting on sackcloth, sitting in ashes and proclaiming a fast for every person and animal in the nation, in repentance for our sins against a Holy God, in the hopes He doesn’t destroy America? Uh, no. Of course not! The thought of that is sadly laughable.

This country is insane with violence, blood, cruelty, corruption, satan worship, idolatry, greed, perversion of every kind, and damn proud of it to boot! We’re even audacious enough to attempt to export our filth to other nations. There is no way America is going to repent, even after the first disaster touches us. God has been gently ramping up the pressure since 9/11. You’d think we’d be smart enough to pay attention, but we’re not.

Nope, tragically it’s going to take a severe shaking to wake the sheeple up enough to realize that there indeed IS a God, He means business, and has had it up to HERE with our national sins. And when disaster strikes, don’t think the world will come running to give us aid or relief either. We’ve pretty much alienated every country on the earth—we are hated, and with good reason.

I love the America that is supposed to be; that existed when I was a very little girl. I don’t love what we are now, and I don’t blame God one bit for what He’s about to unleash on this land. The shameful spectacle of a heathen goddess displayed on the Empire State Building was just another example of the reprobate mind of this nation. Apparently, New York City is a special breed of stupid!

It’s only by God’s mercy that we’ve not been destroyed yet, and it’ll be due to that same great mercy that He will send judgment down to give the lost and worthless Laodicean church a chance to repent and come back to Him, before the rapture takes us home.

If you’re caught up in and enamored with time-sucking, political debates, I urge you to extricate your head from your back passage ASAP and wake up! I’m not certain there will be another presidential election. I’m not even sure there will be enough left of this country to bother with one. By that time, I have every idea there will be bigger things on people’s mind, like how they’ll feed their kids that day.

America is finished. I’ve been singing this sad song for a couple of years now. Again, consult the Word about the way God deals with wayward, wicked nations. He destroys them. He doesn’t owe America anything! WE owe HIM everything we have and everything we are. Unless we pull a Nineveh-style repentance fest, we’re doomed.

I BEG you to get your heart right with God and allow Him to prepare you for the things to come! He is our rock and our fortress from the storm, and He’ll protect and provide for those who belong to Him. He is a good, loving Father who doesn’t punish the righteous with the wicked. That doesn’t mean He won’t take some of us home to be with Him—but He’s fully capable and willing to shelter His children from His judgment.

It’s coming, and soon. Get ready. Repent. Accept the pardon for sin Jesus died to provide to you! You’re running out of time, and tomorrow is not promised to any of us. Sudden death and destruction will fall and you might not have time to call on His name. Don’t be stupid. Today is the day of salvation. Get to it!

2 thoughts on “Just Beggin’ For The Wrath of God”