‘Just like in the days of Noah’: American belief in God drops to new low 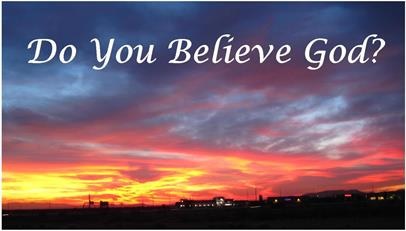 With the ascendance of wicked leftist ideology in a nation awash in decadence, crime and perversion where it is acceptable practice to subject small children to transgender strippers doing the bump and grind at drag queen events, some may feel that America has been allowed to drift away from its religious moorings and a new Gallup poll would seem to offer confirmation of that idea.

According to data compiled by the nation’s premier polling organization, belief in God among Americans has dropped to the lowest level since it began asking the question during World War II, a sobering revelation at a time when immorality is viewed as a virtue and Christian values are under constant attack from the government, the media and an entertainment industry that specializes in pumping out product that glorifies violence and sexual degeneracy.

While the poll shows that an overwhelming majority still does believe in God with 81 percent responding in the affirmative, the number represents a distinct downward trend since the question was last asked five years ago, dropping six percentage points from 2017 and way down from a consistent high of 98 percent in polls conducted from the 1940s to the 1960s.

Responses were made to the simple question of “Do you believe in God?” without any further elaboration in the Gallup Values and Beliefs poll. 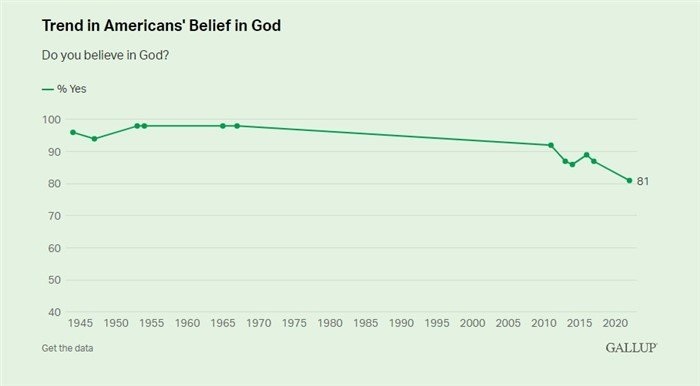 According to Gallup’s Jeffrey Jones who broke down the results, liberals and younger people were least likely to believe in God with a 10 percent decline in the 18-29 years old age group, a result, when taken into consideration with other recent polling that has found that the youngest generation also has a positive view of socialism, is grim news for the future of America.

When it comes to the demographic breakdown, those who identify as conservatives unsurprisingly have the greater belief in God with 94 percent responding in the affirmative, down one point from the last poll, while only 62 percent of liberals believe in the Almighty, down 11 percent from the 2017 survey. The numbers broke down similarly between Democrats and Republicans.

In a somewhat surprising result, faith in God is down 7 percent among rural residents although they are still above the overall average.

Twitter users responded to the disturbing poll with many lamenting the nation’s shifting religious values. Others couldn’t be more delighted that the door has been cracked open for the devil to walk through.

Jones summed it up: “Fewer Americans today than five years ago believe in God, and the percentage is down even more from the 1950s and 1960s when almost all Americans did. Still, the vast majority of Americans believe in God, whether that means they believe a higher power hears prayers and can intervene or not. And while belief in God has declined in recent years, Gallup has documented steeper drops in church attendance, church membership and confidence in organized religion, suggesting that the practice of religious faith may be changing more than basic faith in God.”