Kaepernick Booed in Miami for His Pro-Castro Remarks 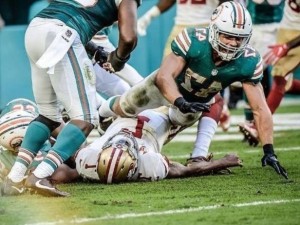 When he trotted onto the field at Hard Rock Stadium in Miami Gardens, Florida, San Francisco 49ers quarterback Colin Kaepernick was met with a chorus of boos, which continued throughout the game, until the boos were replaced with cheers — when Miami Dolphins linebacker Kiko Alonso flattened Kaepernick on the last play of the game, sealing the Dolphins’ 31-24 victory.

“Usually, I just try to play my game. But I did try to hit him,” Alonso explained to Armando Salguero, a reporter with the Miami Herald. The game-winning tackle of Kaepernick was particularly satisfying to Alonso, in light of Kaepernick’s effusive praise of long-time dictator Fidel Castro (who died the Friday before Sunday’s game), which inflamed passions in the Cuban-American community of Miami. Alonso’s father escaped from Castro’s Cuba, as did the family of Salguero, the Herald reporter.

It was the 10th consecutive defeat for the 49ers, the longest losing streak in franchise history.

Kaepernick has faced hostile crowds throughout the season, and even in the pre-season games, because of his decision to take a knee during the traditional pre-game playing of the Star Spangled Banner so as to protest what he considers the oppression of African-Americans in the United States. His specific beef is with the criminal-justice system and police officers. “Cops are getting paid leave for killing people,” Kaepernick said, in explaining his initial protest.

This precipitated a response from a retired police officer, Chris Amos, who lives in Norfolk, Virginia. In a Facebook post that went viral, Amos wrote an “open letter” to Kaepernick. “You see I am a retired police officer that had the misfortune of having to shoot and kill a 19-year-old African American male. And just like you said, I was the recipient of about $3,000 a month while on leave which was a good thing because I had to support a wife and three children under 7-years-old for about two months with that money.”

Amos told Kaepernick that he was firing in self-defense, and was himself struck “by a couple of rounds fired from a gun about two feet away, into my chest and thigh.”

In addition to telling Kaepernick about his own injuries, Amos added, “Colin I have buried 7 friends, killed in the line of duty … I have attended more funerals than I care to remember.”

While addressing a press conference early in the days of the Star Spangled Banner controversy, Kaepernick wore a T-shirt with the image of Castro. Kaepernick has since explained his admiration for the late dictator: “I agree with the investment in education. I also agree with the investment in free universal health care as well as the involvement in helping end apartheid in South Africa.”

He flatly denied that he was a “supporter of the oppressive things that he did,” but argued, “I would hope that everybody agrees those things [that Kaepernick admired in the late dictator] are good things.”

Actually, not everyone favors socialized medicine, or socialized anything else, but even if one allowed that the three things cited by Kaepernick are “good things,” this would be much like someone wearing a shirt with the image of Adolf Hitler, and defending it by saying, “Well, you know, he did some bad things, but he also did a good job on the Autobahn.” Somehow, the construction of an interstate highway system should not make up for mass murder in Germany — and neither should Castro be excused for his brutal dictatorship in Cuba.

Interestingly, Black Lives Matter (BLM), an organization that shares Kaepernick’s belief that black Americans are systematically oppressed by the police, also shares his admiration for Castro’s legacy in Cuba.

BLM posted a tribute to Castro shortly after his death, saying his demise had left them with “an overwhelming sense of loss.”

Why does BLM like Castro so much? They explained, “Revolution is rooted in the recognition that there are certain fundamentals to which every being has a right, just by virtue of one’s birth: healthy food, clean water, decent housing, safe communities, quality healthcare, mental health services, free and quality education, community spaces, art, democratic engagement, regular vacations, sports, and places for spiritual expression are not questions of resources, but questions of political will.”

This is hot Marxist rhetoric. If these things are “rights,” then someone else must be made to pay for them, whether that someone wishes to or not. In other words, one person must reduce his standard of living for another person.

Of course, to Kaepernick, all that is required is just a reordering of governmental spending priorities. Kaepernick praised Castro for “investing” in Cuba’s education system, contrasting that with America’s investment in prisons. This sounds much like 19th-century public-school advocate Horace Mann, who maintained that if we just had more public schools, we would have fewer crimes.

Certainly, Castro had plenty of prisons, housing thousands of political prisoners during his long dictatorship. Armando Valladeres spent 22 years in Castro’s prisons. In his book, Against All Hope, Valladares spoke of the prison food — watery soup, laced with cow intestines filled with feces. Surely not even Colin Kaepernick would prefer prison in Castro’s Cuba over prison in the United States.

Many Cubans did not remain in prison for long, but were instead summarily executed. During the 1960s, the Castro regime even extracted blood from political prisoners before executing them.

But at least he “invested” in education — which was often just indoctrination into communism.

It is not surprising that the Cuban community in Miami broke into spontaneous celebrations when the news broke of Fidel Castro’s death. So, when Castro admirer Colin Kaepernick came to town on Sunday to play a professional football game, the stands were filled with some of those same folks who knew of the brutal dictatorship of Castro — some by personal experience — and knew of Kaepernick’s high opinion of the bearded totalitarian.

That was why it was so satisfying for many in the stands that the game-winning tackle of Kaepernick was administered by Kiko Alonso, the son of a Cuban immigrant. Meeting after the game with his father, Carlos, and Herald reporter Armando Salguero, Kiko told the two men, “You two saw what happened in Cuba firsthand. I didn’t. But I do have feelings about it.”

Carlos added, “He [Kaepernick] doesn’t know about the suffering the Cuban people have had. He’s ignorant. He still had no clue what a ruthless killer of the Cuban people this guy [Castro] was.”

After all, some defenders of the Soviet dictatorship said, “You can’t make an omelet without breaking some eggs.” But, as 1984 author George Orwell responded, “Where’s the omelet?”

For the average Cuban citizen, their healthcare system, while “free,” is a far cry from that found in the United States. And no doubt there are thousands of Cubans who would love to trade places with Colin Kaepernick — because they know a thing or two about real oppression.