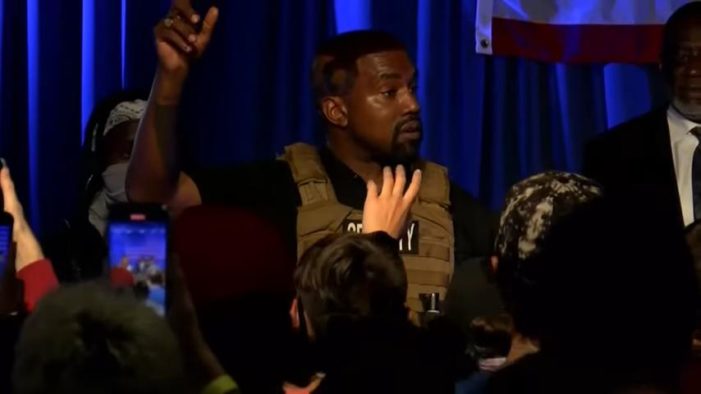 CHARLESTON, S.C. — Rapper-turned-gospel artist Kanye West, who is running for president under the “Birthday Party,” held a campaign rally in South Carolina on Sunday, delivering a profanity-laced speech as he spoke about issues such as abortion, slavery, business dealings and opioid use. He said that God stopped him from aborting his own daughter years ago, using expletives as he quoted what he said the Almighty spoke to him. However, he opined that “abortion should be legal” with the option of receiving payment so that finances are not a reason to end the child’s life.

With “2020” written on the back and sides of his head and wearing a “security” vest, West spoke much about God and the Bible, while also dropping expletives throughout his hour-long speech at the Exquis Event Center, which additionally turned into an interactive session with the audience.

At one point, he explained that when his then-girlfriend Kim Kardashian was pregnant with their first child, they considered abortion.

“In the Bible, it says, ‘Thou shall not kill,’” he said. “I remember that my girlfriend called me screaming and crying, and I was just thinking — because at that time I was a rapper, I was out there, I had different girlfriends and everything … and she said, ‘I’m pregnant.’ And I said, ‘Yes!’ And then I said, ‘No!’”

“For one month and two months and three months, we talked about her not having this child,” West recalled. “She had the pills in her hand.”

But he said that while he was working on music in his Paris apartment, suddenly his laptop screen went blank and God began to speak to him.

He consequently called Kardashian, who is now his wife, and they both agreed that they would keep the child.

West told those gathered that his mother, the late Donda West, likewise saved his life. “My dad wanted to abort me. … There would have been no Kanye West, because my dad was too busy,” he proclaimed to those gathered, before breaking down in tears. “I almost killed my daughter! I almost killed my daughter!” he cried out, being met with others calling back, “But you didn’t!”

West said that he would do away with Plan B if elected, because women would have “Plan A,” which is to receive $50,000 in government support. He stated that he understands why a person would choose abortion, but that “God [can] still make a way.”

West talked about other issues such as opioids, as he had once become addicted to pain killers. “In Europe, there’s a higher threshold for pain. I had plastic surgery to try to look young,” he stated. “After getting the plastic surgery, that was a slippery slope to getting addicted to Percocets,” making him “high as a [expletive].”

“I don’t give a [expletive] if I win the presidency or not. … I am in service to God,” West stated during the event. “God has a plan for us as His people to be finally free. How do we disobey? When we kill, we disobey. When we steal, lie, when we cheat … Politics, Trump, Biden, nor Kanye West can free us. The only thing that can free us is by obeying the rules that were given to us for a Promised Land.”

As previously reported, West appeared at Joel Osteen’s Lakewood Church in November, defending the controversial speaker and “Your Best Life Now” author to a standing ovation.

“There’s a lot of people in the Christian community that try to give Joel a hard time because when you turn on the radio, he keeps on showing you how good God is,” West said to much applause, with many standing to their feet. “God is not the enemy. God is not the negative part. God is not just the perception of fire and brimstone.”

“God is love, is the greatest, is the glory,” he continued. “God is family. God is friendship. God is prosperity. … Keep your eye on the beauty and the love and the grace of God. The grace that allows us to be here today with all of our sins. We know that when we accept Jesus as our lord and savior, we will be granted eternal life.”

Osteen, smiling, quipped in response, “That’s so good. I love that. When you’ve got Kanye defending you, you’ve made it, man.”

The Grammy award winner, previously known for profane and/or blasphemous hits such as “I Am a God,” “I Love It,” “All Mine” and “Monster,” released the album “Jesus Is King” last year and toured with a choir to present songs from the recording.

West boasted during his Lakewood visit, as he spoke during the Sunday morning service, “The greatest artist that God has ever created is now working for Him.”