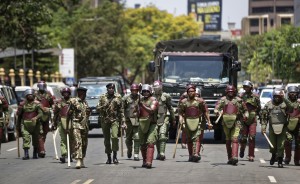 Opposition says government has not done enough to secure democracy

(WNS)–Kenyan police killed at least 33 people and injured hundreds of others during post-election protests staged in some of the country’s opposition strongholds, according to a joint report from Amnesty International and Human Rights Watch. The accusations come ahead of an election redo later this month that triggered renewed demonstrations.

The report includes accounts from victims, witnesses, and police officials, among others. In one instance, a relative of 26-year-old Thomas Odhiambo Okul said Okul died after police shot him in an alley outside his house. Other casualties detailed in the report include a 9-year-old girl who was shot while standing on a balcony and an 8-months pregnant woman who fainted from inhaling tear gas and was eventually trampled to death.

“Dozens of people were killed and many more left with life-altering injuries in attacks by the police against opposition supporters,” said Michelle Kagari, Amnesty International’s deputy regional director. “This deadly use of excessive force has become a hallmark of police operations in Kenya and must be decisively stopped before the next election takes place.”

Odinga pulled out of the election last week after accusing the electoral commission of failing to make necessary reforms, including changing the technology company and ballot provider used in the first vote. He called on his supporters to stage daily demonstrations this week against the commission. The Kenyan government last week banned demonstrations in three of Kenya’s largest cities, citing an “imminent danger of breach of peace,” but protests continued Monday.

Police spokesman George Kinoti rejected the report on police brutality and described it as “sensational.” Peter Aling’o, a Nairobi-based analyst with the Institute for Security Studies, agreed the police responded with force to protesters. Last week, the police used live bullets on protesters in Kisumu, Aling’o said. “There were deaths there, including the death of a schoolboy,” he added.

The U.S. State Department on Friday called on Kenyan security forces to exercise restraint and urged Kenyans to demonstrate peacefully. Aling’o said tensions would remain in the coming days unless the electoral commission makes amendments ahead of the Oct. 26 election. “We merely don’t want to see an election for the sake of it,” Aling’o said. “But the environment this election could take place in doesn’t [support] freely democratic elections.”