“Faith of Our Fathers” Opens July 1

By the time the Vietnam War ended in 1975, more than 3 million people had been killed. This summer, fifty years after the start of the war, millions of people will remember loved ones who either fought (well over 500,000 American military personnel were involved by 1969) or lost their lives while fighting (at least 58,000 Americans). 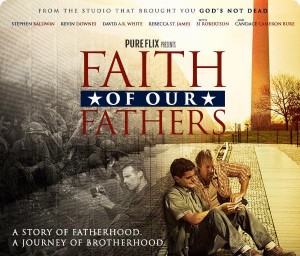 On July 1, 2015, producers and brothers Kevin and Bobby Downes will commemorate the 50th anniversary of the Vietnam War—and honor the troops who served—by releasing Faith of Our Fathers, a film that celebrates faith, freedom and fatherhood. The story spans the 25 years between two young men reporting for duty and their sons later meeting as strangers, thanks to handwritten letters their fathers had sent from the battlefield.

Kevin Downes, who plays the character of John Paul George in this film and is also known for his roles in faith-based movies such as Courageous and Mom’s Night Out, was drawn to this story because “it explores and expresses the importance of fathers in our own lives. We need dads so much. They are there to guide us on our paths and we should never take that for granted.”

Though the Downes’ father was a teacher and didn’t serve in the military, two of their uncles fought in Vietnam and their grandfather had been a soldier too. “I have incredible respect and love for my dad,” said Kevin. “He gave up so much so that my brother and I could have the options we did growing up, always supporting what we wanted to do. That sacrifice is not lost on me and this film is an opportunity to honor that.”

In Faith of Our Fathers, two men team up—not without butting heads or stumbling across obstacles along the way—to piece together their fathers’ relationship during the war and take a road trip to the Vietnam Wall in Washington, D.C.

The visit to the Veterans Memorial was a first for Downes. “It was overwhelming,” he said. “To be able to stand there with all of those names—it was so vast, so huge—and to realize that each one of those names sacrificed their lives. It literally brought me to my knees and I cried for 15 minutes.” Downes then recounts how the shooting of the scene at the wall unfolded. “You have to go through a long process to get permission to enter. We had to be done by 9 a.m. and the park service provided no guidance about what to do with tourists.” The crew prayed that God would open the doors for them and, during the one hour needed for filming, not a single tourist walked through the set. “The moment we called cut, a hundred tourists pulled in!”

Asked how he feels about the recent increase in faith-based films being produced, Downes said, “I think it’s incredibly positive. I commend the filmmakers whether or not they’re Christians. Some of them have a take on those stories that might not line up with my views, but it brings about discussion and awareness.” Downes would like to see more evangelicals “craft the stories we’re passionate about. These are opening doors for us.”

Since the start of his career in 1994, Downes has done nothing but produce faith-based films, nearly one a year. In 2015, Downes Brothers is releasing two. Three months after Faith of Our Fathers hits theaters, Woodlawn, based on the true story of a high school football team torn apart by racism and hate in the early 1970s, will be released. “It’s about reconciliation and love,” said Downes. “I’m passionate about that. It’s a call to revival through the telling of a true story and true perspective… I love producing and making films that glorify God and bring people to a better understanding of how God loves them.”

Faith of Our Fathers, co-produced by Pure Flix, stars other familiar faces such as Stephen Baldwin, Candace Cameron Bure, Rebecca St. James and David A.R. White, who has worked on several films with Downes and played a key role in exploring and developing this story. Downes said he and White fell in love with it because “we can all relate to the themes. We all have a heavenly Father who loves us so much.”