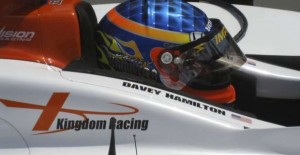 An 11-year-old George del Canto watched in awe as dozens of race cars at the Indianapolis 500 whipped past him on the speedway. His father had pulled some strings to get him onto the starting grid to the biggest event in racing, and the two shared memories that lasted for years to come.

“Walking the grid at the Indianapolis Motor Speedway was amazing,” del Canto said. “That was it. I was hooked for life.”

But while the Chicago native loved the sport and the times he shared with his father, he never thought that he’d be anything more than a fan.

He pursued a career in finance and international trade, and moved on with his life. He became consumed by his business pursuits and forgot about his passions, including motor racing.

“I essentially forgot about the sport, but God did not forget,” he said. “God puts desires deep in your heart and they are there for a purpose. He can use them when the timing is right.”

The time for del Canto started about 15 years ago when he was living in London, working in the financial markets.

“My business world and deals had fallen apart. My wife and kids were estranged because I was only pursuing the bigger, better deal—more money. More prestige. More power,” he said. “I ended up completely lost.”

But thanks to his wife, who had accepted the Lord a couple of years before, he began attending church. He began hearing the gospel and scripture in a new way, and he felt convicted.

“I had nowhere to hide. I couldn’t make any excuses. I knew that I was without a purpose or salvation.”

It wasn’t long after feeling this enormous weight of his poor choices that del Canto gave his life to Jesus. He surrendered to Him and he began to restore his relationships.

“We moved from London to Houston because some of the sermons I was listening to were over the internet, and were given by Dr. Ed Young, Second Baptist Church,” he said.

While del Canto and his wife searched for a house in the Houston area, they were taken with one home in particular. When they got back in the realtor’s car to talk about making an offer, they looked up and saw a sign that said, Welcome to Second Baptist Church, Dr. Ed Young Pastor.

“I looked up and said, ‘Oh my gosh. There’s something going on here,” he said.

So del Canto and his family settled in and he founded a small business that he ran out of his home. He attended church groups, Bible studies and services regularly, and after several years, realized that God had truly blessed his family in this new place.

“I prayed what I say is the most dangerous prayer a Christian can pray. I said, ‘God, you’ve done so much for me, what can I do for you?’” he said. “If you pray that prayer, you better strap in and buckle down because you’re going on the ride of a lifetime.”

It was shortly after he prayed this “dangerous” prayer that he took his 12-year-old son to the Indianapolis 500. He hadn’t seen the race in 20 years, but he was happy to pass on the family tradition.

“We got home and precisely at that time I was meeting with a prayer group of guys,” he said. “We were reading a book called ‘Awaken the Leader Within’ by Bill Perkins. Perkins says that if you’re a real believer, then you must have a blow-your-socks-off vision for God’s Kingdom.”

Del Canto’s group decided they would come back to their next meeting with one of these grand ideas for furthering the kingdom.

“I told my wife about it, and said I had no idea what I was going to tell the guys,” he said. “She said, ‘Why don’t you pray about it?’ So, I said, ‘Lord, give me a vision.’ Nothing. I prayed the same prayer the next day. Nothing. By the third day I forgot about it.”

He went about his week, and the night before the breakfast meeting with his prayer group his wife asked what he was going to tell them.

“I looked at her and said, ‘I’m going to build an Indy car team to deliver God’s word through motorsports.’ She looked at me and said, ‘George, you’d be perfect for that.’”

Although this statement had rolled out of his mouth with boldness, del Canto couldn’t believe what he’d said. He had no connections to the racing world, and he didn’t know the first thing about starting a racing team. He told his prayer group about his idea, and they all agreed that it was a great idea, but he didn’t think anything would come of it.

“But over the next week, I felt a burden on my heart,” he said. “I started having visions of the tens of thousands of people who go to these motor sports races to have a little bit of excitement and to forget their problems, and it pained me to think that these spectators might be lost.”

Del Canto decided to seek counsel from his pastor, who pointed at the door, and said “go forth.” While the business man was excited about the prospect of beginning this new journey, he was a little intimidated.

“I walked out the door [of the church] that day in July of 2005, and here we are in 2017, and we’re going to run our tenth consecutive Indianapolis 500 race on May 28,” he said. “We have run three full Indy car seasons, we have won multiple races, and we’ve impacted tens of thousands of people with the word of God.”

One of the ways Kingdom Racing shares the love of Christ with the people around the country is through the sport itself.

“To compete at the highest level of motorsports and honor God, we have to deliver a top performer,” he said. “We have to be prepared and equipped in such a way that when we run, we can win.”

He wants racing fans to take notice when they see a Kingdom Racing car pulling to the front of the pack.

“We want them to say, ‘Who are those guys? It’s impossible that these guys are doing this,” del Canto said. “Yes, it is impossible, but with the Lord, all things are possible.”

The racing team also has two other ways in which they reach the unchurched. One, is through the Miles of Smiles program that works with local ministries or centers who nominate guests who are going through a particularly difficult time. This could be at-risk children, abused women, or families dealing with addiction, incarceration or illness.

“We invite these individuals to the track for a special day,” del Canto said. “We treat them like rock stars. We give them a VIP tour, a meet and greet with the drivers, take them to the suites, and most importantly, we listen to their stories and we share our story.”

Del Canto and his team have met more than 2000 people through this program, and they not only stay in touch with them, but they connect them with local pastors or church members to encourage them to join a church and follow the path that God has laid before them.

Kingdom Racing also employs another ministry at their racing events that comes in the form of what the founder calls an ambassadors program.

“They go out into the infields and grandstands at race events with a ‘hero card,’ which is like an enlarged baseball card. It has pictures of the drivers and cars as well as a gospel tract,” del Canto said. “The Ambassadors walk around and say, ‘Do you want a hero card?’ People usually say yes, and then we can say, ‘We’re Kingdom Racing, do you know what we’re all about? We’re here for a higher purpose.’”

He said that the connections they make through their ministries are where they really see the fruit of their labor.

“Sure it’s exciting to be at the tracks,” he said. “But I’ll be at the track and looking at the cars going around the turns, and I’ll turn to my colleagues and look up in the stands and say, ‘That’s where the real action is—impacting these people’s lives.’”

Del Canto believes that this is the field God has given him to sow, and now he is doing all he can to work the soil. The founder believes that the field might be growing to include other motor sports series, but he doesn’t want to over plan and get ahead of what God’s doing.

“We’ve learned over the past 10 years to go where God sends,” he said. “We show up, tell our story and then watch God go to work and open doors.”