Franklin, Tn (ANS) – Actor Kirk Cameron is a man on a spirit-filled mission. As he travels around the United States, speaking to audiences on issues concerning faith and family, he consistently hears questions from people concerning our country’s declining moral condition.

Navigating these uncertain times prompted Cameron to call a National Family Meeting for the family of God called “REVIVE US”, which was originally broadcast as a live event from Harvest Chapel in Chicago that brought over 150,000 people in theaters across the nation around Election Day 2016. 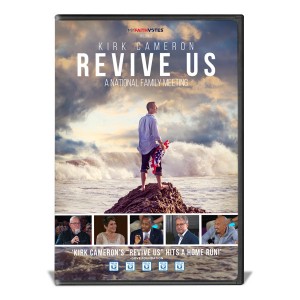 A news release says, “Cameron reminds us that like David running toward Goliath, or Moses and the Israelites backed against the Red Sea with Pharaoh and his army bearing down on them…just when all hope seems lost, God parts the waters! The giant is defeated!

“In America, this could be our ‘Red Sea’ moment — when it’s the darkest just before the dawn, and God splits the sea and we go walking right through! IF WE HAVE EYES TO SEE.”

REVIVE US gathered Cameron’s most brilliant, insightful, and faithful friends, and asked them, “At a time like this, when things seem so dark, what can we do?” Their answers were filled with HOPE and OPTIMISM. They gave a NEW PERSPECTIVE, REFRESHED SPIRITS, and REVIVED HEARTS. We can’t keep this to ourselves. We must share this encouragement with the family of God.

Due to the tremendous audience response, Cameron is currently planning to release a follow-up family meeting to theaters in the fall of 2017.

Alex Kendrick, writer, director of War Room, says of REVIVE US, that it is a “powerful reminder of where our hope is as a nation …,” adding, “I was challenged, inspired, prompted to keep the faith and stay in the fight!”