KY Amish Farmer Jailed over a Salve Label; the FDA Wants Him Jailed for Life 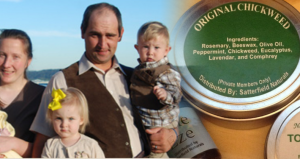 We’ve been waiting the entire trial for Sam to defend himself. Because Sam represented himself, it would look silly for him to ask himself questions, so Sam wrote the questions for himself in advance, the public defender posed the questions to Sam, and Sam answered each question in his own words. There were approximately four or five questions. Sam described himself and his family, a wife, 12 children including five boys still at home, and 27 grandchildren. He described the start of his business. In 1999 he watched his mother cooking chickweed and became intrigued by the herbal properties as this subject has always interested him. He made approximately a gallon of chickweed salve and gave most of it away to friends and family members. He initially had no intention to sell any products, but he was urged to do so by people who were pleased with the salve.

Sam described the FDA coming to his home in Indiana and objecting to the skin cancer claim so he removed that from the label. Sam asked if they had any other concerns and was told they would like to think about it for a week. They never responded. After a few weeks, Sam contacted them and they didn’t reply.

Sam refuted the claim that the Amish were physically intimidating. He explained that they would never intimidate or threaten anyone. Anybody with even a passing familiarity with the Amish would know that to be the truth. He also stressed that nobody cursed at the FDA agents, as that is something they do not do.

Sam stated that he never harmed anybody and never acted to deceive anybody.

Sam explained that he never threatened or intimidated Mary Miller to prevent her from providing evidence to a grand jury. They had discussed the matter because she had no prior dealings with the FDA and in fact that was the last thing this Amish woman wanted, and Sam felt bad that his actions had inadvertently drawn the FDA’s attention to Mary. Sam followed up with a letter to several customers and business associates in a letter addressed to “Friends”. He stated in the letter that everyone was free to do whatever they wanted to do. From the federal government’s perspective it was inappropriate for Sam to contact them, but he was reaching out to confused and very worried friends with whom he had a close personal business relationship. He was trying to explain what was happening to the best of his understanding. A subpoena from the federal government is a terrifying thing to an Amish person. It was obvious from the testimony of all of the FDA’s subpoenaed witnesses that they did feel threatened and intimidated… by the FDA. They were clearly on Sam’s side, even though they were being compelled to testify against him.

Sam admitted to receiving the letter announcing his status hearing, but he didn’t understand that he was required to attend the status hearing. Previous letters specifically instructed Sam to appear but this one did not. Sam believed this status letter to be informational, so he could attend if he chose to do so. To him, it seemed like the announcement of a procedural meeting pertaining to his case that constituted internal court business. Sam became convinced that he was not going to get a fair trial in this court and filed a motion to have his case moved to the 6th Court of Appeals. He had a manager at the 6th Court of Appeals sign when he filed his motion. After that, Sam considered his case to be in the appeals court. When he received a letter from the US District Court, Sam marked RETURN TO SENDER on the envelope and returned it unopened, believing that the district court had not yet been notified of the change of venue by the appeals court.

When the problems first surfaced with the FDA, some time around 2003, Sam hired a lawyer and his lawyer hired an FDA approved lab to test Sam’s products. The FDA also tested Sam’s products in their own lab using liquid chromatography and mass spectroscopy. Both labs reached the same conclusions. The ingredients matched the label’s ingredients list, the samples did not contain any drugs as commonly defined or any alkaloids or poisons, and the samples from different containers of the same product were consistent. In 2003 and 2004, the FDA requested more label changes and Sam made the changes, removing all health claims and only listing the ingredients on the label.

Sam’s testimony made a few points that needed to be made to indicate what he was thinking and why he did what he did in good faith and with malice toward nobody, but the information was presented in a seemingly random order and was not very compelling, particularly after the prosecutor had spent two days, unopposed, maligning Sam as a greedy lawless profiteer whose unregulated products were dangerous.

“There was never an injured party in this case.”

“I’m not dealing with drugs. Their testing will show that.”

“I did not purposefully or knowingly violate one law. That’s not what I do.”

“I changed the labels on different times but I kept getting harassed.”

“Most of all, it’s taken some of our freedom away.”

The officers of the court appeared nervous when the 32 court watchers filed into the court to hear the verdict, with a small overflow crowd in the hallway outside the small courtroom. We were repeatedly warned to maintain order, no matter what they verdict may be. They are apparently not too accustomed to having the public take any interest in these federal court cases, and they seemed to be anticipating a guilty verdict and an angry mob, even though most of the court watchers were Amish and none of the court watchers had demonstrated the slightest evidence of prior misconduct.

The jury returned guilty verdicts on all 13 charges. Not only that, but they found Sam guilty of each separate part of each count, even when only one part would be needed to make Sam guilty of that count against him.

The jury was polled and asked if the verdict as read represents their verdict in this case, and each answered, “Yes.”

The judge will sentence Sam at 10:00 AM on Friday, June 16th 2017. Until then, Sam will presumably be incarcerated in the Fayette County Detention Center.