(WNS)–U.S. political leaders responded with shock and anger to the June 12 terrorist attack at a gay night club in Orlando, Fla., that left 49 dead and 53 injured.

Even as details were still emerging, the mass shooting sparked immediate, vigorous debate on at least four major issues: terrorism, religion, gay rights, and gun control. In public statements, members of both parties tended to focus on familiar topics—Republicans on terrorism and religion, Democrats on gay rights and gun control.

President Barack Obama seized on three of those debates in a rare Sunday address from the White House. He called the attack “an act of terrorism,” mourned the “act of hate” directed at the LGBT community, and renewed his calls for toughened gun control laws.

“As Americans, we are united in our grief, our outrage, and our resolve to defend our people,” Obama said. “Over the coming days, we will uncover why and how this happened, and we’ll go wherever the facts lead us.” 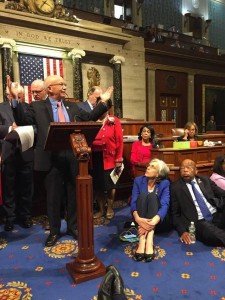 Obama made no mention of Omar Siddiqui Mateen’s Islamic faith or his pledge of allegiance to Islamic State (ISIS) just before the rampage. Shortly after the president’s statement—which was similar to one released by presumptive Democratic presidential nominee Hillary Clinton—ISIS claimed responsibility for the attack. (Authorities have not found evidence Mateen communicated with the group.)

Presumptive Republican presidential nominee Donald Trump focused almost exclusively on religion in his public response. He renewed his call for a temporary ban on Muslim immigration, even though the shooter was a U.S. citizen.

“Appreciate the congrats for being right on radical Islamic terrorism, I don’t want congrats, I want toughness and vigilance. We must be smart!” Trump wrote in a tweet that drew bipartisan criticism. In a statement, Trump said Obama’s refusal to say “radical Islam” was disgraceful.

On Capitol Hill, most GOP lawmakers focused exclusively on the terrorism aspect of the shooting, while offering condolences and prayers.

“We need to be clear-eyed about who did this,” said House Speaker Paul Ryan, R-Wis. “We are a nation at war with Islamist terrorists.”

Few Republicans noted the attack was directed at gays—a lifestyle punishable by death under Sharia law. Sen. Ted Cruz, R-Texas, was an exception, calling for recognition that radical Islamic ideology targets everyone, including the LGBT community.

“Now is the opportunity to speak out against an ideology that calls for the murder of gays and lesbians,” Cruz said. “Every human being has a right to live according to his or her faith and conscience, and nobody has a right to murder someone who doesn’t share their faith or sexual orientation.”

Democrats were quick to proclaim solidarity with the LGBT community and call for gun control legislation, since the shooter used a legally purchased assault rifle to carry out the attack. Sen. Dick Durbin, D-Ill., the Senate’s No. 2 Democrat, said Congress would be “complicit in the next killing,” if it again failed to act.

“We have the power to act, and we must,” Durbin said, according to Reuters. “The bottom line is that we allow dangerous people to buy guns in America and that has got to change.”