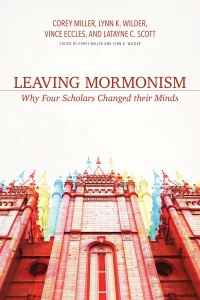 Leaving Mormonism (#leavingmormonism) offers the academic expertise and personal experience of four ex-Mormons who explain why the Church of Latter-Day Saints proved to be intellectually and spiritually deficient for them and others.

No previous book has pooled the collective wisdom of people who are former members of the Mormon church and who also possess the highest academic credentials. Speaking to both the heart and mind, the four contributors share their stories of leaving the LDS church and their well-considered reasons for doing so. All four scholars now embrace biblical Christianity and recognize Jesus as Messiah.

Miller holds a Ph.D. in philosophical theology and teaches philosophy and comparative religions at Indiana University. He leads Ratio Christi, a global campus ministry dedicated to equipping faculty and students with scientific, philosophical, and historical evidence for following Jesus Christ.

Wilder holds a Ph.D. in education and was previously a tenured professor at Brigham Young University. She and her husband cofounded Ex-Mormon Christians United for Jesus. She has mentored thousands of students, written sixty scholarly publications, and now teaches at Florida Gulf Coast University.

Vince Eccles is a research scientist at Utah State University with a doctorate in physics. Latayne C. Scott holds a doctorate in biblical studies and is the award-winning author of more than seventeen books, including one in print for nearly thirty years.

Dr. Miller states, “Our hope is that our words will be respectfully, honestly, and openly considered with both mind and heart” … “The spirit motivating Leaving Mormonism was one of urgent concern for those we love about a future that goes well beyond this life.”

“Drs. Miller and Wilder explain the unique tenor of the book, which is not mean-spirited or hostile to Mormons as people.”