Lecrae on Tour: Sold Out and All In 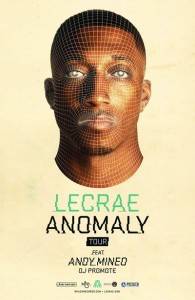 (WNS)–Armed with a picket sign and bullhorn, a lone street evangelist loudly proclaimed the need for repentance to the long line of concertgoers circling the block around a prominent Hollywood concert venue. It’s a typical sight in this town, where sex, drugs, and rock n-roll continue their long reign. But it was preaching to the choir for these hip-hop fans, who wore printed tees that read “God Over Money,” “Redeemed,” and “Unashamed” while waiting to watch Christian rappers Lecrae and Andy Mineo on their Anomaly Tour.

Since finding mainstream success, Lecrae has had detractors who claim he’s sold out to secular hip-hop. His music is no longer solely geared toward the church and evangelizing non-believers. Some take offense because he collaborates with rappers who don’t share his worldview, while conspiracy theorists say he’s joined the Illuminati. The street evangelist claimed the “so-called” Christian rapper needed to repent for his fall from the faith, and his fans did too.

But the concert itself, with its hair-frizzing bass, multicolored lasers, strobe lights, and sweaty crowds getting “turnt up,” painted a crystal-clear picture of the gospel, highlighting brokenness and failure as well as the freedom and hope in Jesus. And with Lecrae’s rise in the hip-hop industry—he hit No. 1 on the Billboard charts with his latest album Anomaly—more people than ever are hearing his message. Beyond the 4,000 people packed into the sold-out Hollywood Palladium Sunday night, anyone with Internet access could tune into the show thanks to Yahoo live streaming. The tour, which ends mid-November, will hit 23 more cities, including Portland, Ore., Chicago, and Atlanta.

Anomaly pretty well summed up the entire concert experience. The attendees were remarkably diverse—ex-gang members covered in tattoos, squeaky-clean youth group teens, parents with elementary-aged children, well-manicured hipsters, and a healthy representation of nearly every ethnicity. I had the distinct impression this random group of people would never be in the same room together if it weren’t for the redeeming work of the cross. Rather than standing in a haze of marijuana smoke or being pushed by a belligerent drunk guy, concert-goers granted generous inches of personal space and passed around a box of Cheez-Its. At one point, The crowd erupted in a call-and-response of “JE-SUS” answered by “YOU KNOW.”

The show started with DJ Promote pumping up the crowd at the turntables with samples of hip-hop classics and electronic dance music. Then he dropped the bass as bright lights flashed. For a moment I forget where I was until the DJ asked, “We know this world is a broken place, is anyone ready for some change in America?” The crowd responded with raucous cheering. But once rapper Mineo stepped onstage to perform music from his latest EP, Neverland, the difference was clear. With his clever wordplay and spitfire delivery, Mineo’s songs ran the gamut from goofy to profound, covering topics from his Italian heritage to overcoming the bitterness he felt about his absent father. His strongest songs are rooted in their relatability. He opened up about struggling with wrong priorities in “Death of Me,” apologizing to God that “I talk about you more than I talk with you.”

Lecrae’s set told the story of his life through short video clips, dialogue with the audience, and songs from his album, Anomaly, from the real struggles of growing up in the inner-city, the hurt he felt from his father leaving, his own mistakes and sins, and ultimately redemption found in Christ. After performing in churches, juvenile halls, evangelical crusades, and sold-out concert venues in the past decade, Lecrae is a veteran on stage, bounding with energy and cuing the audience to sing along. In “Just Like You,” a song from his earlier album, he rapped about his desperate search for father figures, following both their good and bad habits and warning that “You never know who’s right behind you.”

In the night’s most pivotal moments, Lecrae rapped in “Good, Bad, Ugly” about his painful memory of dropping off his college girlfriend at an abortion clinic: “I was too selfish with my time / Scared my dreams were not gonna survive.” The auditorium fell silent as a heartbeat flashed across the screen once, twice, before flatlining.

But from then on, the songs shifted to how Jesus stepped in, bringing forgiveness and a new purpose to his life. “I don’t even really deserve to know you / But I’m a witness that you did this, and I’m brand new,” he rapped in “Tell The World” before the crowds joined in to broadcast the good news like a billboard. He also dedicated a song to his wife, with whom he has three kids, as a video from his wedding played in the background. To the ear-splitting cheers of the crowd, Mineo joined him for an encore performance of “Say I Won’t,” reveling in the fact that they are truly anomalies in the hip-hop culture.

As I walked out with my ears ringing, I wished the street evangelist had come in to see what an incredible platform Lecrae now has to share the message of true hope to those who need it most. As a line from his song “Fear” says, “Jesus, Jesus, Jesus, Jesus, Jesus to all of my haters / For the ones that think I forgot him / And the ones who won’t let me say it.”