At a tender age, she became convinced boys only wanted one thing – sex. After she lost her innocence and got turned off by boys’ aggressiveness, she gradually moved toward the gay lifestyle. Despite a church upbringing, she turned her back on God and eventually became a prominent gay activist and the publisher of Venus magazine.

“I didn’t know how to handle attention from men and boys,” recalls Charlene Cothran. “I was tall for my age and fully developed at nine-years-old.”

Her parents divorced when she was three and the absence of a father left her hungry for affirmation from the opposite sex. “I wanted a guy to really like me.” But when she discovered that most of the boys she met wanted one thing, it turned her off.

“I decided no more of this,” Charlene recounts. She says she closed her heart to boys at 14 and fell into a trap in which lesbianism felt like a “safe alternative.”

In doing so, she drifted from her upbringing in a traditional Baptist church. “I learned the Scripture; I learned about Christ and the cross and His redemptive power. I believed it.” She had once been a youth leader in her church.

When Charlene went off to college in the ‘70s she felt like she was “outside the covering” of the church and she began to explore gay clubs and gay culture in the Atlanta area. “Little by little I gave more and more of myself, my thought processes, and my belief system to the gay lifestyle.”

After college, Charlene began to produce private social events for black lesbians in Atlanta, which were very successful and drew a large following – including many pillars of the community. 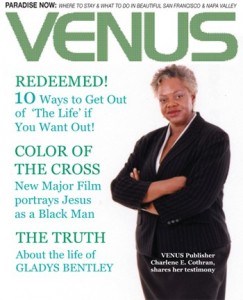 Ten years later, she launched Venus magazine. Aimed at African American gays and lesbians, it gained a multitude of subscribers throughout the world.

At the height of her publishing career, she was hit by the early and unexpected death of her mother due to complications from ankle surgery. Charlene and her live-in partner decided to move closer to her grandmother in Yonkers, New York following her mother’s death.

Charlene bought a three-grave plot for her mother, grandmother, and herself. “That was the beginning of God changing my outlook,” she recalls. “Every time I would go and put flowers on my mother’s grave I was reminded this is where I’m going to be some day. That made me stop and think about things that are eternal. I knew getting buried is not the end.”

What will happen on the other side of death? she wondered.

“Gays did not pay attention to eternity,” she says. “Nobody wanted to talk about death. They pretended that every gay person who died is in heaven.”

Because of her upbringing in the church, she knew that couldn’t be true. But as she considered the seeds planted in her heart during her formative years, she felt conflicted. “I didn’t think I could get out of the lesbian lifestyle. I didn’t think I could access the love God created between a man and a woman.”

You can’t go back to that. You’re a lesbian, she thought.

On a Tuesday morning in June, 2006, Charlene placed a call to a prominent female minister in New Jersey.

“Where are you in the Lord?” the woman asked Charlene. 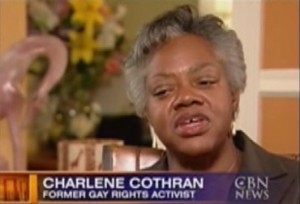 “I’ve been lesbian my whole adult life and I don’t think I could be anything different,” Charlene replied.

Then the minister “opened the book of her life” and shared her own rough past, which included incest, drug addiction and prostitution.

The woman told Charlene that feelings of unworthiness were from the devil. “I know you want to come back to Christ, Charlene,” the woman affirmed.

Then Charlene felt God speak to her heart: This is your day. Choose today whom you will serve. If you choose Me today, I have a Jeremiah 29:11 plan for your life. If you refuse me today, you can do whatever you want, but at the end of that road is judgment.

“I knew it was my day to make an eternal choice,” she says. The tears began to pour down her cheeks. “I felt the Spirit of God on me like never before. I submitted to Him and I knew I was never going back.”

Something like scales fell from her eyes and the light of Christ re-emerged. Charlene looked down and was shocked by what she saw. “I literally looked at my hands and my hands looked new. The world looked different that day.”

Charlene couldn’t wait to tell someone what happened, so that same afternoon she tracked down an older woman who had known her as a girl. Charlene found the woman on her back porch.

“Christ came into my life today,” she told the astonished woman, who began to weep with joy.

“God is going to use you so mightily,” the woman declared. It was Charlene’s first testimony and she says it “solidified something” in her.

“After a year I started to get letters from people saying they were tired of the gay lifestyle,” she notes.

After her awakening, Charlene stunned the publishing world by openly declaring her faith in Christ and rejecting the gay lifestyle in the next issue of Venus magazine. She penned an article that chronicled her transformation, “Ten ways to get out of the gay life if you want out.” Gay activists were outraged and led a campaign that caused her to lose advertisers and eventually the magazine.

“Christ did a 2 Corinthians 5:17 transformation in me,” Charlene says. “I gave myself completely to Him. I gave up that old belief system, all that junk.”

God delivered her completely from any inclinations to return to the old lifestyle. “It is a lie that you can’t change,” she says. “Homosexuals have been changing for years. It was documented by Paul when he wrote, ‘Such were some of you,’” (referring to members of the church in Corinth who had once been homosexual)

Today Charlene pastors Zion Baptist Church of Palm Coast in central Florida and speaks throughout the world, sharing her testimony. Her new publishing venture – Victory magazine – is in its third year.