Let There Be Water: Israel’s Solution for a Water-Starved World

By Seth M. Siegel
“Let There Be Water” is a book about water— water! — and in this respect, it is remarkable for its readability. One might have thought that this would be an intimidatingly technical or even boring book; on the contrary, it is an easy and engrossing read, a series of stories about Israel’s relationship to water in the past and present. Especially enjoyable among these stories are those about individual pioneers in the Israeli water industry, such as Simcha Blass. He’s the man who developed Israel’s National Water Carrier, which originated in the 1930s as a “fantasy plan” to convince the British, who then ruled the area, that the land could sustain more Jewish immigration. As if conceptualizing and designing Israel’s most impressive infrastructure project (one that cost more per capita than the construction of the Panama Canal) weren’t enough, after he retired, Blass invented drip irrigation, revolutionizing world agriculture. Siegel is right to suggest that if the world were a fairer place, Simcha Blass’s name would be more widely known. 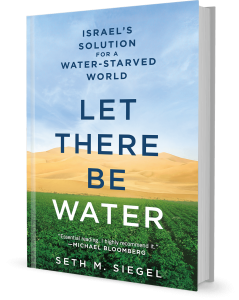 But “Let There Be Water” is also, principally, a book about Israel. In this respect, it is refreshing that Siegel avoids too great a focus Israel’s conflicts, to which so many other titles attend. He does include some discussion of this, however, and it is illuminating. Whereas it is often lamented that the main parcel of land the United Nations deigned to award Israel in its 1947 Partition Plan was the barren Negev desert, Siegel shows how there was resistance even to giving that. It was the vision of David Ben-Gurion, who wanted to make the desert bloom, and the Zionist leadership’s determination to create facts on the ground in the night following Yom Kippur 1946 (a thrilling story) that secured the Negev for the Jews. Siegel also discusses coordination among Israel, Jordan and the Palestinian Authority over water. Unfortunately, the Palestinian Authority is increasingly treating water as a relative sum game with Israel, opting to make trouble even if it causes harm to its own people as long as it might cause greater harm to the Israelis. Siegel also briefly mentions historic efforts by Arab states to deprive Israel of water. These efforts came to nothing, but they were significant because they represented the reasonable Arab belief that water is the key to life and therefore to Israel’s future, but also the Arabs’ unreasonable desire to arrest that future.

The book’s subtitle, “Israel’s Solution for a Water-Starved World,” regrettably introduces an apocalyptic undertone, which seems unnecessary given that Israel’s hydro accomplishments in themselves equal its military, technological and sociological triumphs. But perhaps that undertone is an unavoidable necessity in marketing a volume on a topic that consumers might not generally consider especially urgent. And it’s not just urgent, but also widely relevant: Siegel shows how California and much of the western United States — places that have suffered from water shortages — could and do learn from Israel. As well they should: Only about a billion people have constant access to high-quality water, but whereas most of them live in humid areas such as North America and Europe, Israelis, thanks to enviable ingenuity and tenaciousness, have it in the desert.