Let’s Storm The Gates Of Hell

From November through February, we seem to move from one celebration to another.  Thanksgiving to Christmas…New Year’s Day…MLK…Super Bowl Sunday…Valentine’s Day…Presidents’ Day…there always seems to be something to commemorate.

But it is the “memorial” that is stuck right in the middle of them that should gain most of our attention. Sadly, it is a brief moment in time that passes without much fanfare.

January 22, 1973, is the REAL ‘Day That Will Live In Infamy’. We “commemorate” that day every year; 42 of them so far, just like Memorial Day, Flag Day, and Pearl Harbor Day. These are the times when we remember our dead.

The only difference is that most of our days of remembrance involve past times when a large number of American’s died. Roe-V-Wade day commemorates the killing that continues yet today.

Babies are still being murdered. Women’s lives are still being destroyed. It is a ghastly rampage of murder that still has not ceased. Yet every January 22nd is “pro-life” day, while the bodies continue to stack up like cord-wood.

God forgive the church for our calloused comfort with this child killing.

Try as I might, I cannot think of a greater evil than abortion. It is the seminal issue of our day. Abortion has destroyed America. Nothing else even comes close. Children are our future. God says they are a blessing. Why would we kill the blessing? Why does the church permit it?

There is nothing more evil than killing one’s offspring. You will not find anything to match it in the animal kingdom. Dogs don’t kill their babies. Cows don’t. Even the wretched vulture sits on her eggs until they are hatched. It is the natural inclination of all parents to protect their children…even the unborn ones. 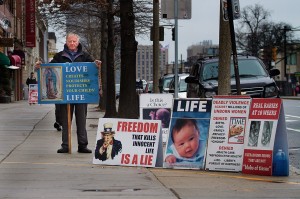 Only a human being could perform such a diabolical deed.

Today is January 22nd Why don’t I feel like celebrating by “Marching for Life” while death continues unabated?

I have been to the “March for Life” more times than I can count. I have attended events around the nation and have spoken at “rallies” commemorating the slaughter of the unborn. (Funny, isn’t it? We call events fighting the scourge of child-killing “rallies”…but rallies for what?)

Forty two years of “rallies.” Forty-two years of child sacrifice. An entire generation of Americans has been destroyed because of the church’s acquiescence to “choice.” It is the church’s fault, you know. Child killing continues only because “the church” permits it to continue.

My wife and I spent last weekend in St. Louis as part of an event commemorating the slaughter. It was held downtown on the steps of the Old Courthouse. We wanted to do it out in the open, publicly, to awaken the heart of Americans to the slaughter still taking place right before their eyes. Our event was held to memorialize the dead, not to ‘march for life’. It was to honor those who never took a breath of air.

Ironically, the Old Courthouse in St. Louis is the same building where the infamous Dred Scott decision was handed down. You remember that decision, don’t you? The one where the “judges” judged that Mr. Scott and his wife were not “people.”

Chief Justice Roger B. Taney declared in his decision:

“In the opinion of the court, the legislation and histories of the times, and the language used in the Declaration of Independence, show, that neither the class of persons who had been imported as slaves, nor their descendants, whether they had become free or not, were then acknowledged as a part of the people, nor intended to be included in the general words used in that memorable instrument…They had for more than a century before been regarded as beings of an inferior order, and altogether unfit to associate with the white race, either in social or political relations; and so far inferior, that they had no rights which the white man was bound to respect; and that the negro might justly and lawfully be reduced to slavery for his benefit.”

Four years later, as a judgment from a higher court in Heaven, America was plunged into a great “Civil War” which cost the lives of nearly 700,000 American citizens. If slavery cost America 700,000 lives, what will be the price of 70 MILLION unborn lives?

“The judgments of the Lord are true and righteous altogether.” -Psalm 19:9.

Our “judges” once ruled that Negroes were not people. Ironically, this is the same argument that they make today for unborn babies. Unborn babies aren’t people, so it is OK to own them and to kill them. Unborn babies, too, have become property.

Instead of wasting all of the time, energy, and money to “March For Life” in Washington, don’t you think it would be a better idea to simply “March to Planned Parenthood” and demand that the killing stop? What if every one of the nearly 1 million marchers who will descend on Washington today would make the commitment to simply show up outside the killing centers and demand abortion be stopped?

What if every Bishop in America ordered that the churches be closed until the killing stops? What if they told their congregations that Mass would be held outside of the abortuary until it closed? How long would it take to close them down if millions of Catholics got serious about the deaths?

What if the Evangelical pastors did the same? What if your pastor said that there would no longer be “worship” services in your church until baby murder stopped? What if they took their praise and worship teams and their choirs and their silver-tongued preaching and proclaimed God’s Word at the very gates of hell? I’d give them a week…maybe two at the most.

What if the churches got together and each one took a particular day of the week where their congregation would hold services outside the abortion mill? What if seven days a week the slaughter-pit was bombarded by the praise and worship of faithful Christians on the streets proclaiming liberty over the spirit of death that is haunting America?

The greatest of all evils is taking place under the watchful eye of the church. Politicians won’t stop it. Marching to Washington won’t stop it. I think it is time we tried a different strategy.

Instead of “marching for life” in Washington, it’s time to “march against death” at your local killing center. Jesus told us that the gates of hell would not prevail against the church.

It is time to storm the gates of hell…