(WNS)–California revamped its social-science education guidelines in July to incorporate lessons on historic LGBT individuals and social movements in the approved curriculum. The decision garnered almost unanimous support at a public meeting and across the state, but some Californians are concerned about its long-term impact on their children.

Approved lesson guidelines—including half of the material from proposed plans—educate second-graders on “LGBT families in the context of understanding family diversity as a contemporary and historical reality” and fourth-graders on pioneer gender relations and crossdressers in the Old West, said supporter Judy Appel, the executive director of the advocacy group Our Family Coalition. 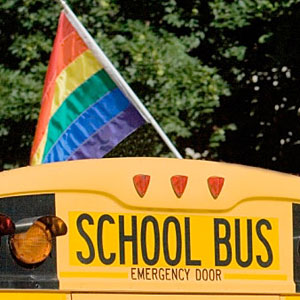 Other historic LGBT figures will be in the spotlight too. If this year’s LGBT History Month icon list is any indication, figures could include the likes of President James Buchanan, entrepreneur Malcolm Forbes, rock star David Bowie, and celebrity drag performer RuPaul.

“We’ve heard a lot of our teachers who want to teach this material, but didn’t have the resources,” Appel told me. She sounded excited her 15-year old daughter and son—raised by her and her partner Alison—will be able to tune into lessons about LGBT milestones in the classroom.

“History is very personal for people, and this is how we are telling our story,” she said.

Critics, however, fear the new curriculum is oversexualized for young children and could replace more crucial historical events and figures.

“There is no mention of Manifest Destiny or Native Americans,” 11th grade teacher Brianna Leemkuil told CBS Sacramento about one of her class’s units. “You want us to talk about a tiny LGBT community and ignore the killing of an entire people group?”

California’s Department of Education’s communications director, Bill Ainsworth, told me the new guidelines are not enforced by the state, but suggest a list of textbooks and materials from which districts can select. He said neither private nor public schools have to adhere to the guidelines, but the resources will provide “lots of info on LGBT individuals and their communities that more accurately reflect their role in history.”

According to Appel, these textbooks will be released in 2017.

“A lot of parents certainly want to have more control over how their younger kids are introduced to these adult concepts,” Matthew McReynolds, a senior staff attorney at the Pacific Justice Institute, told me. His legal defense organization has tried to get the FAIR act repealed over the years.

Like Leemkuil, McReynolds is also concerned the guidelines will oust more consequential highlights from textbooks. He said LGBT history month’s noteworthy figure lists have included a few notable individuals in the past, but, more often than not, obscure athletes, current pop musicians like Lady Gaga, and homoerotic writers fill up its ranks.

“Most people think it is the most prominent gay activists being featured,” he said, adding that most teachers and parents don’t realize the scope of celebrated LGBT figures is larger—and yet, not quite as historic as they had imagined.