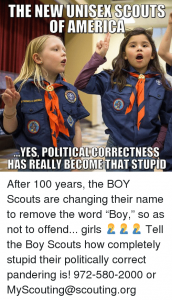 The Boy Scouts were once known for their strength and honor, but ever since LGBT activists have gotten their hands in the mix, the Boy Scouts have plummeted down a dark path, and lost their core values.

From accepting girls into their ranks, to ignoring sexual assault, the Boy Scouts have insulted those who have come before them and made a mockery of their organization. But the Boy Scouts latest move is so outrageous, it has now officially pushed them past the point of return.

The Boy Scouts launched a new campaign called “Scout Me In” and will now refer to themselves as Scouts BSA.

LifeSite News reported: “The “Scout Me In” campaign “reinforces that the mission and core values in the Scout Oath and Scout Law are welcoming, inclusive and foundational for both young men and women,” the BSA said in a press release.

“As we enter a new era for our organization, it is important that all youth can see themselves in Scouting in every way possible.

That is why it is important that the name for our Scouting program for older youth remain consistent with the single name approach used for the Cub Scouts,” said Michael Surbaugh, Chief Scout Executive of the Boy Scouts of America.

“Starting in February 2019, the name of the older youth program will be ‘Scouts BSA,’ and the name of our iconic organization will continue to be Boy Scouts of America.”

Yet again, LGBT activists try and eliminate gender, by insisting boys and girls are the same. But they’re not. There is nothing wrong with calling Boy Scouts “Boy Scouts” and Girl Scouts “Girl Scouts.” But sadly, the Boy Scouts have been headed down a dark path for years.

Eagle Scouts were once seen as a high honor for young boys to strive towards. One Eagle Scout reported on the tragedy of what the Boy Scouts have done to the once respected rank.

Townhall reported: “Former Scouts have walked on the Moon, become President, and won the Heisman Trophy,” said President Reagan at a luncheon commemorating the group’s 75th anniversary in 1985. “Today they serve as Cabinet Secretaries, as my Press Secretary, and in the Congress.  In fact, about two-thirds of the Members of the Congress have been in the Boy Scouts.”

I was proud to be a Scout, prouder still to earn my Eagle rank just before my 18th birthday.

But of course, as we all know, once social justice warriors get their slimy tentacles into something their thirst is never quenched until that something is entirely destroyed, and such has it been with Boy Scouting ever since its clueless national leaders began leading the organization down that perilous cliff.

Once again, liberals destroy everything wholesome and sacred, and target children at a vulnerable age. The Boy Scouts, once founded upon Christian values, is now a breeding ground to attract leftist leaders, seeking to poison the innocence of young children.

From “transgender” members, to openly homosexual leaders, and now the most recent name change, parents should do best to keep their boys (and girls) as far away from the Boy Scouts as possible.