Los Angeles, CA (ANS) – The uncanny resemblance between a young British actor and a mid-16th century painting in the Louvre Museum in Paris depicting David fighting Goliath may or may not have played a role in landing him the part of David in the new movie, “David and Goliath.” But the likeness could be an amazing coincidence.

Miles Sloman began his acting career at the Edinburgh (Scotland) Fringe Festival and was subsequently accepted into the internationally reknowned National Youth Theatre of Great Britain, with which he has ongoing involvement. He later auditioned for and was accepted by the prestigious Oxford School of Drama for an intensive period of theatrical training. 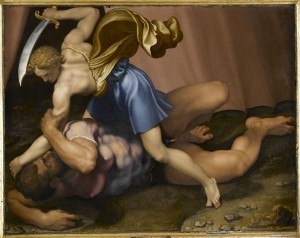 Now he has been chosen for the lead in the latest Biblical epic to come out of Hollywood in recent months, hot on the heels of “Noah” and “Exodus: Gods and Kings.”

The painting being referred to as the basis between the likeness of the young David and actor Sloman is one of a pair of engravings of the biblical story of David and Goliath illustrating the moment when David, having felled the giant with his slingshot, is about to behead Goliath with his own huge sword, and known as ‘Le Combat de David et Goliath’ [The Battle of David and Goliath].

According to the website of the George Glazer Gallery the engravings are based on a large two-sided painting on slate that was long attributed to Michelangelo (that attribution included in the dedication on this print).  However, current scholarship says the painting is by a friend and associate of Michelangelo, Daniele Ricciarelli da Volterra, painted in about 1555 and quite possibly based on drawings by the master. 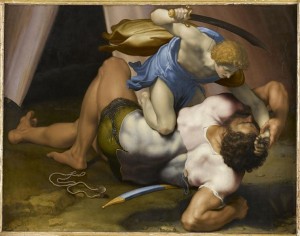 The website states: “The painting was presented to the French king Louis XIV in 1715 by Nicolas Giudice, clerk of the apostolic court, and later a cardinal, and is now displayed at the Louvre in a gold frame on an elaborate pedestal that allows viewers to walk around it and see both sides.

“Daniele’s style is aligned with that of Michelangelo’s in that his treatment of the subject is strongly volumetric with attention to the musculature of the figures, posed with heroic gestures as they fight for their lives.  These compositions show David preparing to strike the final blow in front of a tent, similar to Michelangelo’s painting of this subject in a fresco in the Sistine Chapel.”

Sloman, who is riding high after a grueling shoot in the North African desert playing ‘David,’ jokes: “I know Tim Chey (the director) didn’t pick me because of that (painting).”

“We wanted a world-class actor and only the hand of God could have picked Miles,” said Tim Chey. “We casted in LA, New York, Toronto, London, Madrid, et al, and he beat out a stiff competition.”

London-based Sloman beat out more than 7,000 actors to win the part of ‘David’ in the high-profile movie that opens April 3 in theaters nationwide, according to a media release.

“So many words have been written about David,” says Sloman, “that I truly needed to understand such motivation that his faith undoubtedly gave him. For me the clues were in the script, Tim has spent a huge amount of time on getting it right and true to the story in order to make it as Biblically correct as possible.”

Sloman has to think about his biggest challenge playing the part. “Taking a lead role in such a significant film was initially daunting and I put a fair amount of pressure on myself, but with the help and support of my fellow actors I felt at ease from the first take and ended up loving my time in Africa.” 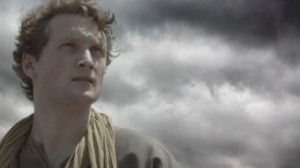 Chey says Sloman is just being gracious about his part. “He didn’t mention the time he fell off a donkey because of my stupid hubris.”

A helicopter taking shots of the scene spooked the donkey causing the donkey to buck and knocking Sloman six feet into the air. Sloman got up and bravely wanted another go. “Miles became my hero at that point,” said Chey.

Fortunately for Sloman, Chey’s wife, Susan, also a producer, is a former nurse and she tended to Sloman to make sure he had no broken bones. “He’s a real trooper,” she said, adding: “and everyone had deep respect for him on the set from that day forward.”

Sloman says of David that, “He is absolutely driven by his unfaltering faith, something I really admire. He remains true to himself and doesn’t give up despite everyone’s best attempts to put him down. It’s the ultimate underdog story, and I think a lot can be taken from David’s sheer determination, faith in God, and courage to stand up to adversity.”

“David and Goliath” looks at one of the most powerful and beloved Bible stories of all time. The film will focus on the early life of David who fought against the Philistine giant, Goliath against all odds, and is considered the most Biblically correct.