Living Hope — Even in the Darkness of Despair, There is Hope 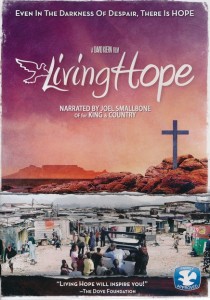 NASHVILLE, TN (ANS) — Living Hope is a powerful story about three incredible people who chose to give up all of the creature comforts of their home and journey to South Africa to help and serve the poor and the sick. Their actions attracted the attention of foreign dignitaries, rock musicians, and even U.S. Presidents.

Following the lives of John Thomas, Leonie Rustin, and Joey Lankford, you will see the absolutely devastating state of places in Africa and see how these people are using their skills and abilities to help serve these people with their medical needs.

According to a news release, they realize that it is God’s call on their life to go to these places and help the people who are sick and dying. These people have no way out of their incredible struggle for survival, and they hope to help them with their medical skills and efforts.

Through their service, they are also able to communicate the importance of Jesus and tell them about His amazing sacrifice on the cross for their very lives.

While their main purpose is a medical effort, they are able to use this unique situation to spread the love of God to those who may have never even heard His name spoken before. In Living Hope, you will learn about their story and see how three Christians have accepted God’s call in their life and are using their abilities to serve in far-off countries and make His name known.

Filmed in a visual style comparable to a National Geographic feature, Living Hope takes audiences on a cinematic journey to Cape Town, where they follow alongside a group of amazing individuals who have devoted their lives to serving the poor. Living Hope offers a seldom-seen perspective of the joy, heartache, and passion of missionaries in Africa.

Pastor John Thomas has been the Senior Pastor at King of Kings Baptist Church since 1987 in the City of Cape Town. John has worked hard to make a stand for the poor, following the example of Jesus, he is helping to serve the poor and needy in the communities surrounding him.

John is also the founder of Living Hope, an organization set up to address the issues of HIV/AIDs. It offers services ranging from Home Based Care, a Health Care Centre, support groups, Life skills training, Lay Counselling as well as job creation, agricultural training, a homeless center and addictions programs in 7 communities around the Church, employing more than 200 staff and volunteers. He is married to Avril and they have two grown up children, four grandchildren.

Leonie Rustin is a single mom and nursing assistant. Her life has undergone incredible change that could only truly be brought about by God Himself. Formerly a drug addict, she turned from her strong addictions and gave up her old life to follow God wholeheartedly. Leonie has chosen to help other in her situation and teach them what she has learned. Helping to break the shackles of prostitution in the communities around her, she shows those trapped in the sinful bondage a way out and a way to forgiveness. Helping put an end to prostitution and drug addiction, Leonie hopes to pass on what she has learned and help a new generation find forgiveness and redemption.

Joey Lankford is a businessman and father to four children. When his family was young, he moved them from the United States to Cape Town. Here, Joey and his wife help to equip men and women with occupational skills, so they can find a way out of their poverty. Joey helps people escape their homelessness and teaches them marketable skills so they can find jobs and be able to support themselves.

David Kiern and Mitchell Galin are the producers behind Living Hope with many different film and TV credits to their names. Kiern has worked on dozens of films, music videos, and documentaries. He has worked for several larger companies including Hallmark Channel, World Vision, the NFL, and Big Idea. Mitchell Galin has produced multiple films and series including Hallmark Channel’s The Shunning and Stephen King’s The Stand. He uses his knowledge and skills in this film to co-produce an incredible documentary with filmmaker David Kiern. Between their combined skills and abilities, they work toge

ther a masterful documentary that tells a powerful story of service and selflessness.

You can host a screening in your church or purchase the DVD to support the Living Hope efforts. The Living Hope trailer can be seen at: LivingHopeDocumentary.com