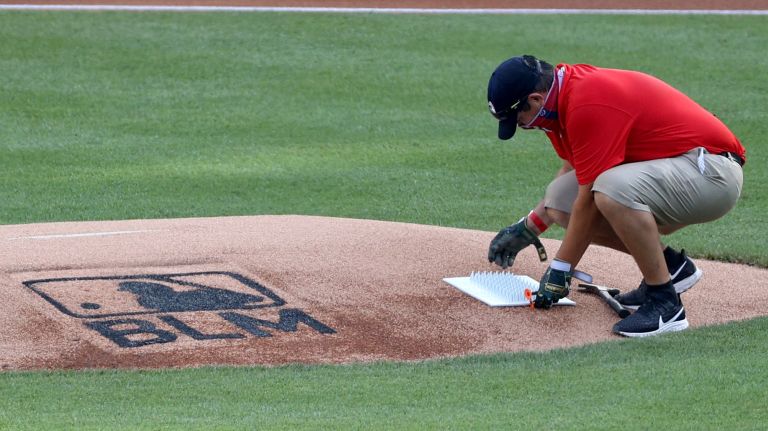 Major League Baseball has announced plans to stencil “Black Lives Matter” on the pitcher’s mound during opening week, beginning with the Washington Nationals and New York Yankees game on Thursday.

“The Nationals, in conjunction with Major League Baseball, stand with the Black Lives Matter movement and will utilize the platform and national stage of Opening Day to express support for the fight against systemic racism and injustice,” the team announced in a statement, according to ESPN.

MLB has reportedly given every team the OK to emulate the Nationals Black Lives Matter activism.

It was also reported that the league told players that they have permission to put social justice slogans on their jerseys in place of their names.

To add to its injection of politics into baseball, the Nationals also announced that coronavirus advisor Dr. Anthony Fauci would throw out the first pitch.

“Dr. Fauci has been a true champion for our country during the COVID-19 pandemic and throughout his distinguished career, so it is only fitting that we honor him as we kick off the 2020 season and defend our World Series championship title,” the Nationals said in a statement, ESPN reported.

Fauci is reportedly a huge Washington Nationals fan and is sometimes seen in masks with MLB team logos.

Pro baseball teams have begun to infuse left-wing politics into the sport this season at a growing pace. Just in the last three days, the Boston Red Sox virtue signaled this week with a gigantic Black Lives Matter billboard erected outside Fenway and overlooking the Massachusetts Turnpike. And members of the Cincinnati Reds took a knee against the country during the national anthem on Tuesday.