March Madness And The Mathematics of Grace

By instinct I feel I must do something in order to be accepted. Grace sounds a startling note of contradiction, of liberation, and every day I must pray anew for the ability to hear its message.

Eugene Peterson draws a contrast between Augustine and Pelagius, two fourth-century theological opponents. Pelagius was urbane, courteous, convincing, and liked by everyone. Augustine squandered away his youth in immorality, had a strange relationship with his mother, and made many enemies. Yet Augustine started from God’s grace and got it right, whereas Pelagius started from human effort and got it wrong. Augustine passionately pursued God; Pelagius methodically worked to please God. Peterson goes on to say that Christians tend to be Augustinian in theory but Pelagian in practice. They work obsessively to please other people and even God. 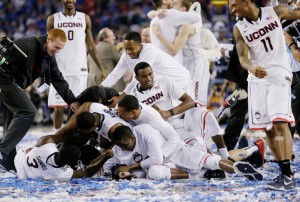 Each year in spring, I fall victim to what the sports announcers diagnose as “March Madness.” I cannot resist the temptation to tune in to the final basketball game, in which the sole survivors of a sixty-four-team tournament meet for the NCAA championship. That most important game always seems to come down to one eighteen-year-old kid standing on a free-throw line with one second left on the clock. He dribbles nervously. If he misses these two foul shots, he knows, he will be the goat of his campus, the goat of his state. Twenty years from now he’ll be in counseling, reliving this moment. If he makes these shots, he’ll be a hero. His picture will be on the front page. He could probably run for governor. He takes another dribble and the other team calls time, to rattle him. He stands on the sideline, weighing his entire future. Everything depends on him. His teammates pat him encouragingly, but say nothing.

One year, I remember, I left the room to answer a phone call just as the kid was setting himself to shoot. Worry lines creased his forehead. He was biting his lower lip. His left leg quivered at the knee. Twenty thousand fans were yelling, waving banners and handkerchiefs to distract him. The phone call took longer than expected, and when I returned I saw a new sight. This same kid, his hair drenched with Gatorade, was now riding atop the shoulders of his teammates, cutting the cords of a basketball net. He had not a care in the world. His grin filled the entire screen.

Those two freeze-frames—the same kid crouching at the free throw line and then celebrating on his friends’ shoulders—came to symbolize for me the difference between ungrace and grace. The world runs by ungrace. Everything depends on what I do. I have to make the shot.

Jesus calls us to another way, one that depends not on our performance but his own. We do not have to achieve but merely receive. He has already earned for us the costly victory of God’s acceptance.