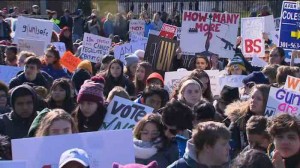 If there is any group that believes in get ‘em while they’re young, it’s the Left. They have almost completely taken over the media, education system and entertainment industry, putting aside much educating and informing in favor of propagandizing and misleading. Who can deny that many of our founders have, in recent years, been depicted as pariahs?…our country painted as irredeemably racist and unjust?

Like many of us, I watched the March For Our Lives and was near outraged at the ignorance. It was almost a remake of the sixties flower children, convinced they had a better idea, a better morality than their parents. They didn’t! Grace Slick from San Francisco’s Jefferson Airplane said it best, “In the sixties, we thought we could change the world. In the seventies, we found we couldn’t even change ourselves, so we went for the money.”

The Left has managed to convince several generations that they have the power to create a perfect or near perfect world…to rid ourselves of racism and hate. They lied.

Children, by nature are without experience, without context, self-centered, and can easily be mean. By their teen years they are totally absorbed with wanting to belong to a group, never wanting to be on the outside. Combined with a narrow historical perspective, the young can readily be gathered for a ‘family’ cause with the only admission being in agreement with the authority figure(s) they see every day in school. It is not totally inappropriate for children to be engaged in current affairs, but to suggest they have solutions is ludicrous. The Left knows and depends on this. Liberals are not interested in their thoughts, only their loyalty and stage presence. The Left is winning the hearts and minds of an entire generation. The rest, the adults who should know better, the past graduates of their indoctrination were gladly demonstrating the misinformation they were so ably taught.

In the early sixties, our Supreme Court cut loose our anchors. No more prayer and Judeo-Christian principles in schools. Fifty years later we remain adrift with no answers.

The Left has managed to convince several generations that they have the power to create a perfect or near perfect world…to rid ourselves of racism and hate. They lied.

The Bible said it thousands of years ago, but few are listening. The Old Testament speaks of law, but laws change no one, law saves no one. The entire purpose of the Law was to show that you can’t abide by it, because it is not within you. The New Testament speaks of change from within. Only from accepting a power greater than yourself can that change take place. So, most of us struggle, forever lost in a fallen world…flashlights without batteries.

Our Constitution is their curse. Their vile struggle is to get this country disarmed so as to be able to dictate their policies, their morality, to implement their godless society, their law.